For the first time, the Florida House is posting copies of contracts between lobbyists and local governments online and more than a third of the first set of contracts posted are with one lobbying firm: Ron Book of Aventura. 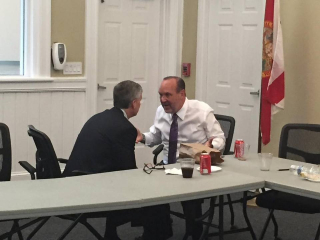 Book has been a fixture in the halls of the Capitol for four decades and has built local government lobbying work into a cottage industry in Florida.

House Speaker Richard Corcoran, R-Land O-Lakes, is a vocal critic of the practice. He has called it a "disgrace" that cities, counties, school boards, sheriffs and others spend tax dollars on hired lobbyists to represent their interests in Tallahassee. Corcoran says local elected officials should be doing that work themselves, and that legislators should be able to look out for local interests without the help of hired guns.

But the practice is common and has grown over the past decade. Lobbyists hired to represent local governments often get unparalleled access to the powerful because they make campaign contributions, which cities and counties can't do. Many local governments also hire lobbying firms in Washington, too.

Corcoran, who has challenged business as usual in the state Capitol on a number of fronts, could not get a consensus of House members to outlaw the practice in the House rules, which they could have done. Instead, the rules require mandatory disclosure of all government contracts by any lobbyist who lobbies the House. No such requirement exists in the Senate.

Taxpayer-funded lobbying contracts are already public record. However, this is the first time they will be posted in one place where anyone can compare what comparably-sized cities and counties pay for the same work by contract lobbyists. The disclosures could easily set off a bidding war, as lobbyists and local officials discover for the first time wide disparities in what cities and counties are paying.

Seventeen of the first 46 contracts posted online are with Book's Aventura firm, totaling more than $1 million a year.

Nearly all are with local governments in South Florida. Miami-Dade County paid Book $120,000 over the past year, Fort Lauderdale paid him $97,500 and Broward County paid $53,000. The city of Tallahassee pays a total of $90,000 to Book's firm and the lobbying firm of Sean Pittman.

Book and his associate Kelly Mallette also lobby on behalf of the Public Health Trust, which operates Jackson Memorial Hospital in Miami.

Book, whose daughter Lauren Book is a newly-elected Democratic senator from Broward County, said his first tax-supported client was the South Broward Hospital District in Hollywood more than 20 years ago. "When nobody was representing local government, we started representing local governments," Book told the Herald/Times. ""We felt they were entitled to the same type of representation that private sector clients were receiving."

Book also posted his lobbying contracts with Brevard County and the cities of Palm Bay and Marco Island.

Marco Island, on Florida's southwest coast, with a year-round population of about 17,000 residents, pays Book $60,000 a year to lobby on its behalf in Tallahassee. A 10-page contract requires that Book meet with city officials no less than once a year and to "monitor and track all legislation of interest to the city."

Lobbyist and former state Rep. Paul Hawkes, Buchanan Ingersoll & Rooney, Cardenas Partners LLC, the Fiorentino Group and Rutledge Ecenia are among the other firms whose contracts are the first to be posted online.