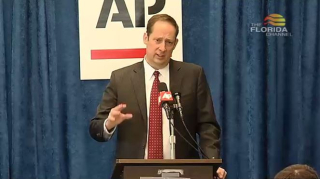 "I don’t expect the governor to put the priorities of the House and Senate in his budget," Negron, R-Stuart, said. "I have the burden of proof to convince him and convince my colleagues that based on Amendment 1 and based on the current issue that it’s appropriate to spend money on additional water storage south of Lake Okeechobee."

Sen. Rob Bradley, R-Fleming Island, filed legislation last week to carry out Negron's $2.4 billion plan to buy 60,000 acres of farmland to create a water-storing reservoir and prevent future toxic algae outbreaks in local estuaries, such as those that wreaked havoc on the state last summer.

In reiterating his pitch for the land buy, Negron said "the best we've come up with" as a state hasn't worked and isn't good enough.

"We have a lake in the middle of Florida -– one of the largest lakes in the country -– and it rises when you have a lot of rain. So when that happens, and it gets too high, we say the only solution we can come up with in the United States of America … is we’re going to open up floodgates and we’re going to drain the water through man-made canals and we are going to poison estuaries, rivers and now the ocean," Negron said.

"This is it? This is the plan?" he added. "It’s not acceptable. No one’s defending it anymore."

While Scott's budget proposal doesn't include money for the land-buy, it does recommend more than $215 million for several water storage projects around Lake O, including federal projects for the Indian River Lagoon for which the state bears some of the cost.

The Legislature ultimately decides on the state's annual budget, although the governor has some veto power over specific projects.