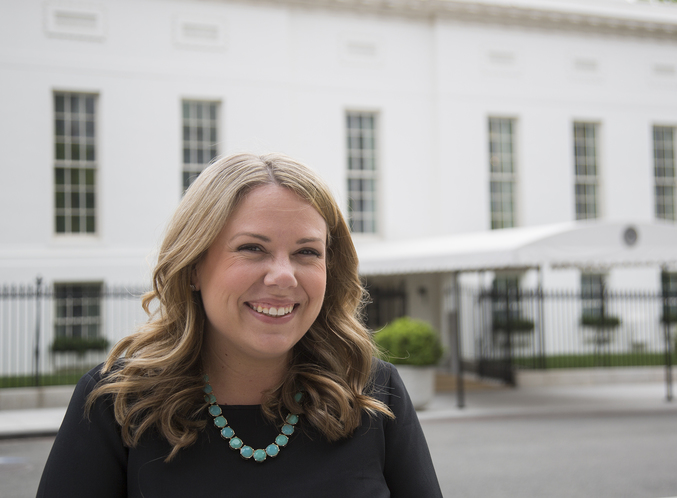 WASHINGTON - The University of Miami was buzzing over hosting the first presidential debate between George W. Bush and John Kerry and for one undergrad, it was a career defining moment.

Kaelan Richards started out as an undeclared major then history, then political science. “I loved politics but didn’t necessarily know what that means in terms of a job,” she said.

Richards staffed the 2004 debate, taking tickets at the door. Then a coordinator said she and a group of other volunteers could go inside. “It was life changing,” recalled Richards, who grew up on Anna Maria Island.

This week, Richards wrapped up her “dream job” in the White House press shop. “It’s an incredible honor to be here,” she said in an interview. “With anything ending, there’s a little bit of nostalgia and wistfulness.”

Richards' work kept her focused on Florida. She was a senior regional communications director interacting with reporters in the southeast, midwest and the west coast.

“While national outlets and broader media trends change, people still rely on their local news. That’s a really important job and I’m honored to do it,” she said.

She worked on Capitol Hill for Sen. Ted Kennedy, D-Mass., and Rep. Rosa DeLauro, D-Conn., and joined the White House team in April 2014.

One of her biggest moments was briefing President Obama for the first time in January 2016. The president was sitting down with regional news reporters to talk about the Affordable Care Act and Richards and others were tasked with filling him in on local issues.

“There’s really nothing that can match walking into the Oval Office for the first time to do your job,” Richards said. “It was a little bit nerve-racking but mostly exciting. This is dream job, a dream opportunity.”

Richards walked out to see Press Secretary Josh Earnest give his final briefing to reporters. She took photos with colleagues from the North Lawn and turned in her badge.

She says she’ll take some time off, and maybe visit Florida, before deciding what to do next. “It’s a unique opportunity to get a little perspective and think about things.”

Earnest, who worked on Jim Davis' 2006 gubernatorial campaign against Charlie Crist, said Richards "has worked tirelessly and effectively to bring President Obama's message outside of the Washington beltway, directly to people living in communities across the country. She's done so with a level of integrity and enthusiasm that has earned her the admiration of journalists and colleagues alike."