House Speaker Richard Corcoran, R-Land O'Lakes, summoned his fellow Republicans to a private event at an upscale bar and restaurant in Tallahassee Wednesday night, and nearly all of them showed up to hear his message. 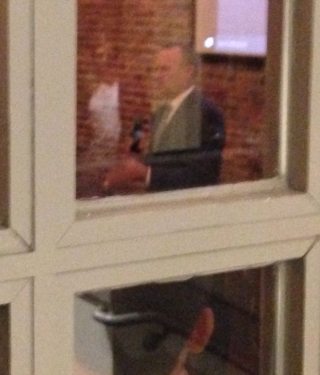 The House Republican caucus meeting at The Edison was closed and a Herald/Times reporter was not allowed to cover what Corcoran (left) said was a social function. The speaker, who has emphasized transparency and accessibility, closed the doors as he played a five-minute video eviscerating Enterprise Florida.

The video was produced by the House Majority Office, meaning it was paid for by taxpayers and played at a private event where the media was excluded. The video repeatedly showed the message "No more" and included a graphic that said: "No more picking winners and losers."

Summarizing his message to his members, Corcoran said: "Stay on the moral high ground. Don't get down in the weeds. Be statesmen and keep talking about facts and issues." Explaining why he refused to allow a reporter inside the room for the 20-minute event, Corcoran said: "You'll change the dynamic."

Corcoran and Gov. Rick Scott are locked in a bitter political struggle over the use of tens of millions of dollars in taxpayer money for Enterprise Florida and Visit Florida for job and tourism subsidies that Corcoran says are "corporate welfare." Some House members are livid that Scott has traveled to suburban Jacksonville and Panama City this week to personally criticize two of Corcoran's allies, Reps. Paul Renner and Jay Trumbull, for supporting elimination of the two programs.

On Thursday, Scott is headed to Brevard County, the home of a third Republican who opposes Scott on incentives, freshman Rep. Randy Fine, R-Palm Bay.