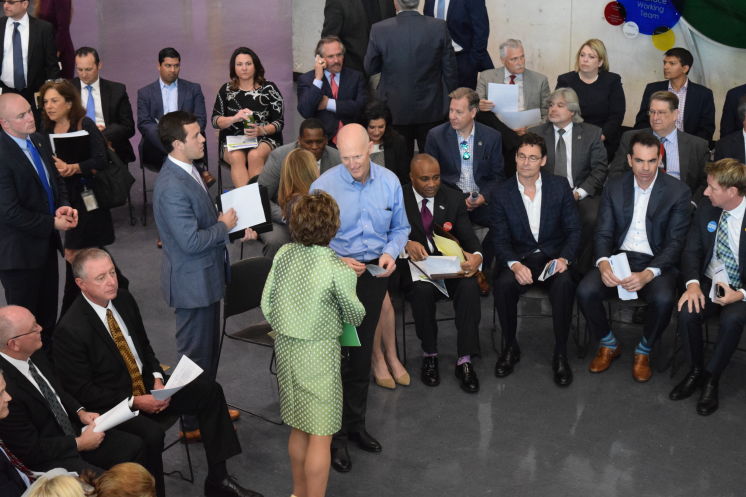 Gov. Rick Scott was in Tampa on Monday where he singled out State Rep. Shawn Harrison, R-Tampa, as one of nine Republicans who voted for a bill that would kill Enterprise Florida and Visit Florida (Photo courtesy of Museum of Science and Industry in Tampa)

Sure, the Republican Governor’s office called his stops in Cape Coral, Tampa, Panama City, and Jacksonville this week the “Fighting for Florida’s Jobs” tour. But they all coincidentally have one big thing in common.

All four stops have been in the districts of four of the nine House Republicans who last week voted to killed two of his most cherished agencies: Enterprise Florida and Visit Florida. And in each stop Scott was sure to remind business leaders that their locally elected representative was part of the group of 9 Republicans defied him and voted to completely eliminate those two agencies, which Scott says have been keys to Florida creating 1.2 million private sector jobs since he was elected.

House Republicans have moved to kill the agencies, saying both are a forms of “corporate welfare” that put the government in the role of picking some companies over others to get funding.

In Tampa on Monday, Scott responded by literally standing in Rep. Shawn Harrison’s district at Tampa when he went off on the Republican for backing the plan.

“I am shocked, right here locally Shawn Harrison voted against Visit Florida and Enterprise Florida,” Scott told reporters after repeatedly telling business leaders at the Museum of Science and Industry that Harrison voted for the bill to kill the agencies.

Harrison responded on Twitter, telling supporters that as a small business owner he's never taken incentive dollars and that "taxpayer funded job creators should prove themselves!"

Later it was off to Flagler Beach, where Scott launched into Rep. Paul Renner, whose district include Flagler Beach.

In case anyone didn't catch the name, Scott went after Renner two more times during the roundtable and singled him out again when speaking to the media later. At one point he accused Renner of essentially saying he thinks Flagler Beach has enough jobs and doesn’t need any more.

“But your politicians in Tallahassee today are saying, in your area, that they don’t need any more jobs,” Scott said. “That is exactly what Rep. Paul Renner said.”

Renner didn't exactly say that, but has declared economic incentives as unfair because not every business gets taxpayer support.

In each of the stops, Scott’s has also had a handout that shows overall job creation in each county, the drop in the unemployment rate, and jobs that Enterprise Florida has been responsible for bringing to the area.

Scott hasn’t shown up in everyone’s backyard yet. For instance, Scott has yet to hit Sarasota  County where both Reps Julio Gonzalez and Alex Miller are from. Both voted for the bill as well. But there, one of Scott’s biggest supporters and an influential donor to local candidates, Jesse Biter, penned a letter to the Sarasota Herald-Tribune where he accused Miller and Gonzalez of betraying the business community.

“We deserve better than Alex and Julio,” Biter wrote in the letter.

It’s hardly the first time Scott has tried to use public pressure to get what he wants out of the Legislature. Last January, Scott had a campaign-style bus tour and used television commercials to try to pressure state lawmakers to boost funding for Enterprise Florida.

It failed. Instead of getting $250 million for job incentive programs, Scott got nothing.

Last week, the House Careers & Competition Subcommittee voted 10-5 to kill those two agencies. Nine of the panel’s 10 Republicans voted for the bill. The only Republican to oppose the plan was Rep. Joe Gruters, R-Sarasota, a longtime ally of Scott’s who sounded much like Scott in defending those agencies before the vote.

“Jobs, jobs jobs,” Gruters said just moments before committee voted to kill the agencies. “The state wins when we bring targeted industries to our communities. We will have another economic downturn and we need to do everything we can to diversify our economy.”