Jeb Bush ally among Trump's guests for speech to Congress 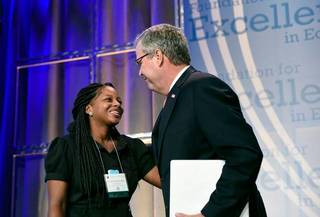 A Florida woman who became an ally of Jeb Bush on school reform will be a guest of President Donald Trump's for the Tuesday night address to a joint session of Congress.

Denisha Merriweather of Jacksonville was named in a White House news release. "After struggling with coursework as a child and switching schools often, Denisha moved in with her godmother and enrolled in the Florida Tax Credit Scholarship Program," the description reads. "She began going to a private school, Esprit de Corps Center for Learning, and would go on to be the first member of her family to graduate from high school and college."

Merriweather's success was championed by Bush, and he frequently invoked her on the campaign trail.

Keep reading here for the rest of Trump's guests.