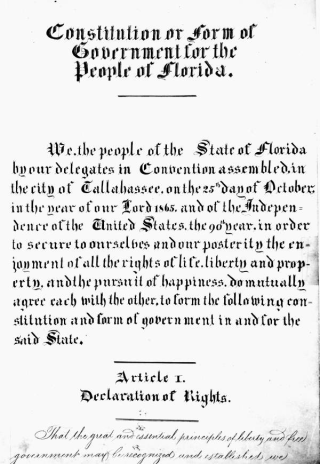 Senate President Joe Negron named eight Republicans and one Democrat to the powerful Constitution Revision Commission Wednesday that he said each have a "tireless work ethic" and a commitment to revising the state constitution to reform state education laws.

"The appointees are strong advocates for school choice opportunities that celebrate the power of the parents to determine what form of education is best for their child,'' Negron said in a statement.

Negron and House Speaker Richard Corcoran each have nine appointments to the 37-member commission that meets every 20 years to put constitutional amendments directly on the 2018 ballot.

Negron made his selections from a list of 100 applicants and among those he rejected were  two sitting senators, Dana Young, R-Tampa and Greg Steube, R-Sarasota.

Negron and Corcoran have both indicated they will choose applications to the panel who are committed to education reform and increasing school choice options for students in kindergarten through eighth grade. Corcoran has said he wants the panel to recommend disabling the "Blaine Amendment," which prohibits state money from going into religious education programs, and both have been vigorous defenders of Florida's school voucher programs and the state's expansion of charter schools.

"The most serious and important issue for me, and a common thread among our Senate appointees, is a fervent commitment to individual liberty and personal freedom guaranteed by our state and federal constitutions,'' Negron said. "The Senate appointees are all women and men of good judgment.”

"I applaud him in wanting to see if we can make some changes that will benefit parents and kids through the CRC,'' said Patricia Levesque, director of the Foundation for Excellence in Education whom Negron appointed to the commission.

She said she hopes the commission will "blend the ability of parents to make incredible decisions for their kids and make sure we keep a high emphasis on public institutions which are core."