« Invalid votes for president spike in Florida, outnumbering Trump's margin of victory here | Main | A 'sanctuary cities' bill is in the works for 2017 session » 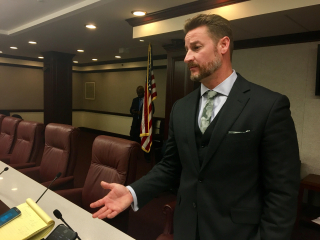 Say a movie theater in Florida banned its patrons from carrying concealed handguns, but a mass shooter came in anyway and attacked — not unlike what happened in Aurora, Colo. almost five years ago.

Under an NRA-backed measure proposed this week in the Florida Legislature, victims who had a permit to carry a concealed weapon could sue the theater for damages, because its weapons ban left them disarmed when they might have been able to use their gun to thwart or stop the attack.

The new proposal (SB 610) from Senate Judiciary Chairman Greg Steube — a conservative Sarasota Republican who has proposed a slew of controversial gun-rights measures this year — says the “Legislature intends to find a balance” between gun-owners’ rights and private property rights.

And Steube’s plan to do that means businesses would be held responsible — and put at risk of being sued — for decisions to ban guns.

“It’s the premise in Florida that if a private business wants to prohibit guns in their location that’s open to public, that’s fine they can do that,” Steube said. “But if you’re going to do that, in my opinion, I should have some assumption that I’m going to be protected as a conceal-carry permit-holder because you’re taking away my ability to defend myself.”