« Florida Senate could vote on higher ed reforms during first week of 2017 session | Main | No firebrand, but Joe Negron says he's just as committed to principles »

Rubio quietly returns from Europe and is confronted in Miami 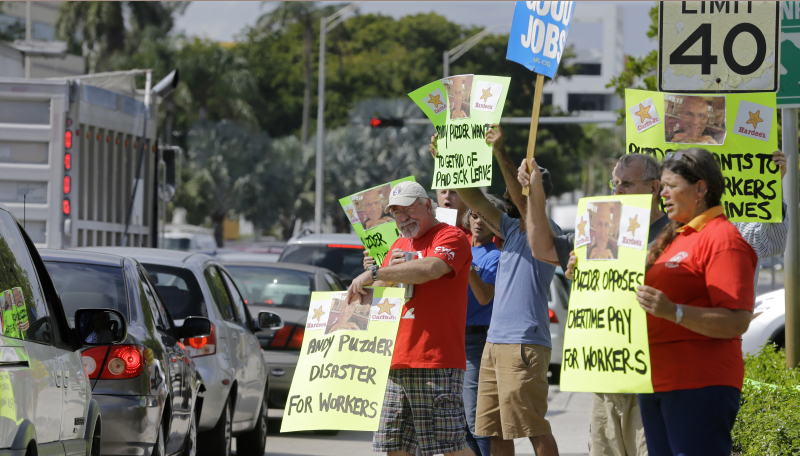 The line from U.S. Sen. Marco Rubio's aides when they were asked this week why the Florida Republican wasn't planning any town hall meetings during the congressional recess was that he was away in Europe on Senate business.

But Rubio returned quietly Wednesday night -- and was promptly confronted Thursday morning by a protester who found the senator even though he hadn't publicly listed any appearances.

In a video posted on Facebook by Miami activist Tomas Kennedy, a protester chases Rubio down at Jackson Memorial Hospital. The video was first reported by the Miami New Times.

"Senator, I thought you were in Europe," an unidentified man says on the clip. "Are you going to host a town hall?"

The New Times reported Rubio returned from Europe in time to teach his weekly politics class at Florida International University.

Indivisible Miami, an anti-Trump group, has planned an empty-chair town hall -- to be held with or without Rubio -- for Thursday night. Another one is scheduled for Saturday in Plantation. Activists held a similar event Wednesday night in Tampa, featuring a Rubio cardboard cutout. More than 500 people attended.

Rubio's office said the senator was at Jackson for a roundtable discussion on Florida's opioid crisis. The office did not advertise Rubio's appearance in advance, as it often does with local events so news reporters can attend. Aides later posted a recap of the event on Rubio's Senate website.

The senator's Europe trip was also shrouded in mystery. Rubio's office didn't say until Monday that he had made the trip to France and Germany; he'd been expected to depart for Europe on Germany to attend the Munich Security Conference but didn't due to extended Senate business. No day-to-day schedule or recaps of Rubio's trip have been made public, either.

Labor groups have been picketing Rubio's Doral office on a weekly basis over his support for President Trump's Cabinet picks. Protesters have also shown up at the offices of Miami Republican Reps. Carlos Curbelo and Ileana Ros-Lehtinen this week, asking for town halls.

Republican lawmakers' town halls across the country have turned rowdy, but that hasn't stopped legislators -- including Florida Reps. Gus Bilirakis and Dennis Ross -- from holding them.