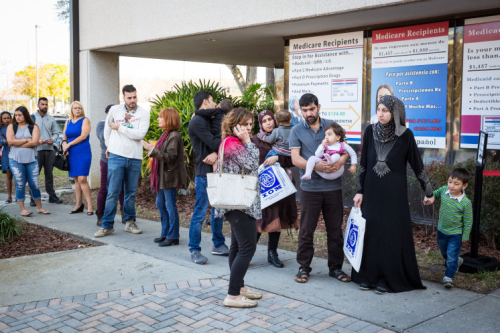 Lawmakers took their first step Thursday toward removing Florida from the refugee resettlement program amid charges that the federal government was not an effective partner with state law enforcement.

The House’s Children, Families and Seniors Subcommittee voted 9-5 along party lines for legislation (HB 427) to pull out of the refugee program. Similar legislation has not been filed in the Senate, indicating it may have limited possibility to become law.

With refugees at the center of national debate on President Trump’s travel ban, pulling out of the program has been called a political move.

Doing so would not end the flow of refugees to the state. Rather than state officials coordinating a $250 million federal program in Florida, the feds would partner with nonprofits in the state.

Q&A: Refugees are in the spotlight again. Here's everything you need to know.

State Rep. David Santiago, R-Deltona, filed the legislation in response to complaints that state law enforcement agencies do not receive enough information about refugees before they arrive. Refugees face a lengthy vetting process that can take two years but is conducted by the UN and several federal agencies, not state law enforcement.

“The intent of this bill is to send a clear message to the feds that if we are going to be partners in a program, we ought to be true partners,” Santiago said.

The fear is that a terrorist might pose as a refugee to gain entrance to the country.

Rep. Julio Gonzalez, R-Sarasota, said the program is effectively a contract in which the state of Florida does not benefit.

However, there have been zero instances of a refugee committing an act of terrorism in Florida, and there are few documented cases in other states.

In fact, experts said, Florida could actually lose access to the limited information its Department of Children and Families currently receives by leaving the refugee program.

“If this bill were to pass, the consultation that does occur now and has for quite some time would be cut off completely,” said Mark Schlakman, senior program director for the Florida State University Center for the Advancement of Human Rights.

Democrats said the legislation would have no real impact on security, calling it a politically motivated attack on refugees in need of help and support.

“The bill does not prevent the federal government from sending refugees here,” Rep. Kionne McGhee, D-Miami, said. “What the bill does is it sends red meat to the base of a political party in order to justify future elections.