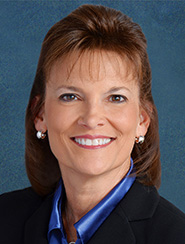 A longtime state lawmaker from Central Florida announced Wednesday she’s running for state Agriculture Commissioner in the 2018 election, setting up a GOP primary for the open seat.

Sen. Denise Grimsley, a Republican from Sebring, called her candidacy “a continuation of the public service that has meant so much in my life.”

Current Agriculture Commissioner Adam Putnam is term-limited next year, after having served two terms. The only other candidate seeking to replace Putnam so far is Orlando Republican Paul Paulson, who launched his campaign in December.

Grimsley said she intends to file paperwork with the state on Wednesday, which will allow her to begin raising campaign money. That paperwork is not yet available through the state Division of Elections. State records show she has less than $4,300 in the bank from her state Senate re-election fund.

Grimsley is a nurse and hospital administrator, as well as a businesswoman, citrus grower and rancher. She has been in the Florida Senate since 2012 and, last term, served as the deputy majority leader. She was re-elected in November to a two-year term. Previously, she was in the state House from 2004-2012.

“I’ve operated our family businesses and know treating the customer well and with respect is key to any success,” Grimsley said in her campaign statement. “We are the sum of our experiences, and I offer my candidacy to continue the principles of conservative public service I have followed in my career, both in the private sector and in the Florida Legislature.”

“Florida has many challenges in our agriculture industry, yet we have so many more exciting opportunities,” she added. “We will continue to fight for a smart statewide water policy, we will protect our environment and blessed Florida resources, and we will pursue expansion of the over 2 million jobs Florida agriculture provides our state.”