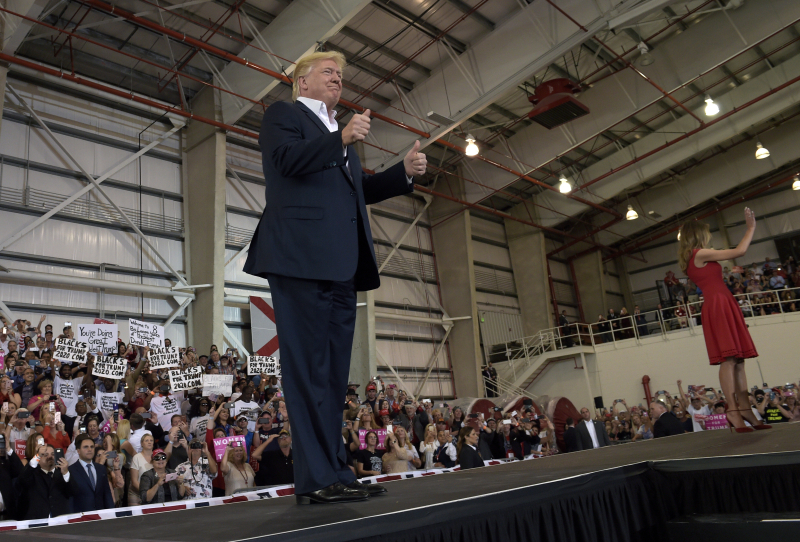 MELBOURNE -- President Donald Trump reprised his favorite role — that of a rousing campaigner — on Saturday, holding a massive rally that offered him a respite from the tribulations of his first four weeks in the White House as he tried to regain control of his political message.

Faced with a series of early setbacks, including the firing of his national security adviser, the rejection by the courts of his immigration ban and low approval ratings, Trump reverted to the comfort of his candidate stump speech. To an ecstatic crowd of 9,000 at an Orlando-Melbourne International Airport hangar, Trump repeated his campaign promises, in some cases word for word — making it seem for a moment as though the months on the calendar had somehow flipped back to 2016.

Now, however, the Trump of 2017 stood behind a lectern bearing the presidential seal.

“I’m here because I want to be among my friends and among the people,” he declared.

Holding a rally less than a month after inauguration is not unheard of for American presidents. But in the past, such public events have been choreographed to push a specific policy, a priority of the nascent administration’s first weeks in office.

Trump, who has yet to send any proposed legislation to Congress, didn’t make a case for a single issue. He urged lawmakers to work with him on tax reform, an infrastructure spending plan and the replacement of the Affordable Care Act but did not dwell on the particulars.

He also rattled off a list of his accomplishments, such as nominating Judge Neil Gorsuch to the Supreme Court, restarting construction of the Keystone and Dakota Access pipelines, and pursuing a more aggressive deportation policy for “gang members and drug dealers who are right now, as I speak, being thrown out of the country.”

“And they will not be let back in,” he said. “We will have strong borders again.”