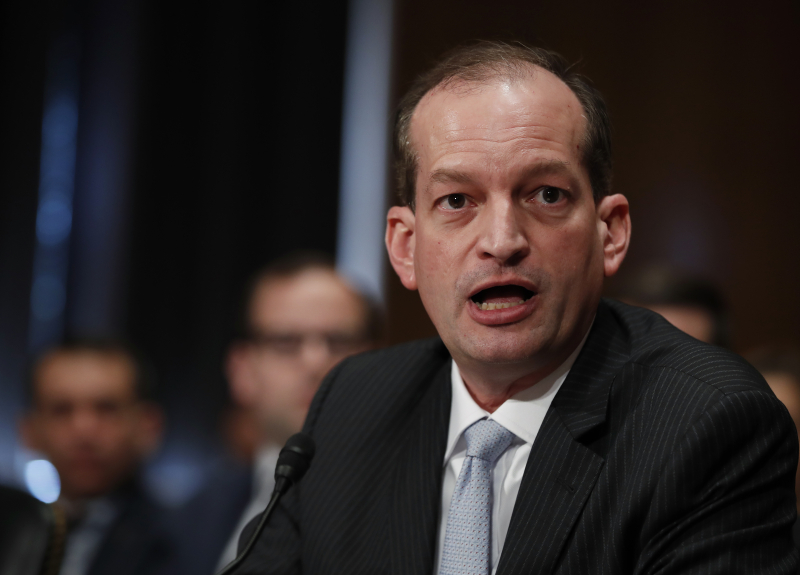 As U.S. attorney in Miami, Acosta -- now dean of Florida International University's law school -- signed off on a plea agreement that attorneys for Epstein's victims called a "sweetheart" deal.

Virginia Sen. Tim Kaine, a Democratic member of the Senate Health, Education, Labor & Pensions committee, asked Acosta if he approved the deal despite opposition from prosecutors in his office.

Acosta called his office's involvement unusual, given that Epstein was charged by state prosecutors following a grand jury's recommendation.

"We deemed it necessary to become involved, and we early on had discussions within the office," Epstein said. "We decided...that Mr. Epstein should plead guilty to two years, register as a sexual offender and concede liability so the victims could get restitution. If that were done, the federal interest would be satisfied and we would defer to the state."

Acosta's office drafted a 53-page indictment that was never used. Declining to discuss specifics of the case, Acosta called it "pretty typical" to write up an indictment that "often does not consider the strength of the underlying case."

Kaine asked again: Did his staff agree with cutting the deal?

"It was a broadly held decision, yes," Acosta said.

Acosta was introduced Wednesday by Florida Sen. Marco Rubio and Texas Sen. Ted Cruz, both Cuban-American Republicans like Acosta. If confirmed, Acosta would be the only Hispanic on Trump's Cabinet.

Sen. Patty Murray, a Washington Democrat, asked Acosta about his time heading the Justice Department's Civil Rights Division -- particularly his foray into an Ohio voting-rights case days before the 2004 presidential election. Acosta sent an unsolicited letter to a judge siding with Republicans who challenged the eligibility of thousands of African-American voters.

"I want to ask you if you regret the decision to send that letter in 2004," Murray asked.

Acosta argued the letter was misinterpreted: "We were not taking a position on what was being done in Ohio specifically," he said. Murray called his response "a very legal answer" and pressed him again.

"As an attorney to the Department of Justice, sometimes you have to do things that are unpopular but are legally correct," Acosta said. "The letter is legally correct. I wish the letter was not interpreted the way it's interpreted."

"I have prosecuted UBS, the international bank, and as a result of that prosecution, they changed Swiss law," Acosta said. "I've prosecuted major drug cartels for 200,000 kilos -- the heads of the Cali cartel -- for 200,000 kilos of cocaine. I have been in public service the better part of my professional career, and I've seen pressure, and I don't for a second believe that senior officials would or should bow to inappropriate pressure."

"We work for the president. He is our boss," Acosta added. But, citing the confirmation hearing of former Bush Labor Secretary Elaine Chao, he concluded: "We all will ultimately follow his direction -- unless we feel we can't. And if we can't, we resign."