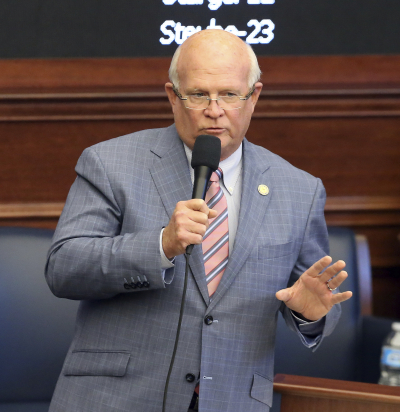 Florida’s public schools would have to let students lead religious prayers during the school day and at school-sanctioned events, under a controversial proposal that the state Senate approved Thursday, mostly along party lines.

Sen. Dennis Baxley, R-Ocala, heralded his bill (SB 436) as a way for lawmakers to “take a stand for liberty,” because it makes explicitly clear the rights to religious expression that students and teachers have in public schools, regardless of their faith.

But Democrats worry the measure goes beyond existing protections of religious freedom and violates the constitutional separation between church and state. They also fear it could lead to students and teachers being ostracized or discriminated against if they’re of non-Christian faiths or non-religious.

The bill passed on a 23-13 vote, with Miami Shores Democratic Sen. Daphne Campbell voting with Republicans to support the bill. Campbell told the Herald/Times: “I don’t see anything wrong. The bill is not discriminatory. ... I just don’t see how anyone could be against prayer.”

Baxley’s proposal — which has large support from Christian and conservative-leaning groups — is more controversial and more far-reaching than a companion measure that’s moved through the House with, so far, unanimous support. The full House could vote on its bill (HB 303) as early as next week.