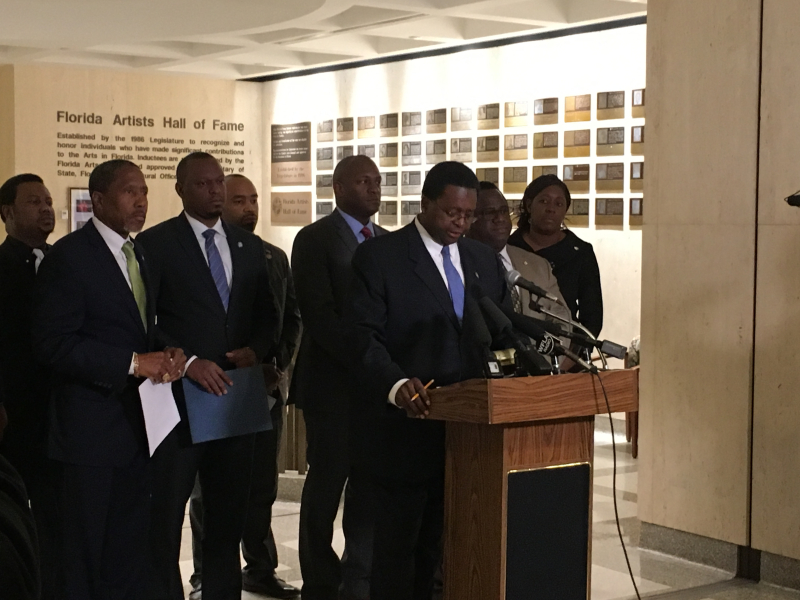 Members of the Florida Legislative Black Caucus on Thursday called for Gov. Rick Scott to change his mind and rescind an executive order that transfered the case of a man accused of killing a police officer in Orlando away from the local state attorney after she declared she would not seek the death penalty.

The order, signed by Scott last Thursday after State attorney Aramis Ayala publicly said she would not seek death for Markeith Loyd or any other accused murderer while she is in office, gives the Loyd case to Ocala-based State Attorney Brad King.

Since the order, Scott has faced pressure from all sides. Some, including lawmakers, have demanded he suspend Ayala from office. Others, among them a group of lawyers and former state Supreme Court justices, call Scott's decision an overreach.

"Gov. Scott's hasty response to State Attorney Ayala's announcement set a dangerous precedent and is a slap in the face of the voters who carried her into office," said Sen. Perry Thurston, D-Lauderhill, the chairman of the black caucus. "In this way, the order operated as little more than an unfettered and uninformed power grab by the governor's office over a difference of opinion."

Removing Ayala from the Loyd case was unprecedented, Thurston said. He contends that the state attorney is using her prosecutorial discretion in choosing not to seek the death penalty and that Scott has gone beyond what the Constitution and state law intend by removing her from the case for this reason.

Thurston noted that Scott did not intervene -- nor were there widespread calls for him to do so -- when Miami-Dade State Attorney Katherine Fernandez Rundle decided last week not to prosecute guards at Dade Correctional Institution who locked a schizophrenic inmate in a hot shower for two hours until he ultimately died.

But, he said, Scott should not have stepped into either case, allowing prosecutors to make the decision for themselves.

The governor has broad authority in the Constitution to move cases away from state attorneys if he believes justice would best be served by doing so, though it is most often used to avoid conflicts of interest. Ayala asked a judge to intervene in a court filing earlier this week.

In a statement, a spokeswoman for Scott said he stands by his decision to reassign the case against Loyd.

"Markeith Loyd is accused of executing Lt. Debra Clayton, a brave law enforcement hero who was on the ground fighting for her life, and murdering his pregnant ex-girlfriend Sade Dixon. Orange County Sheriff’s Deputy Norman Lewis was also killed while actively searching for Loyd," spokeswoman Kerri Wyland said. "As Governor Scott has continued to say, these families deserve a state attorney who will aggressively prosecute Loyd to the fullest extent of the law and justice must be served."

No white person has been executed in Florida for killing a black person.

And research has shown that race of the defendent and race of the victim both play critical roles in the outcome of a death penalty case here.

Ayala, who was elected in November, is the first African-American state attorney elected in the state's history.

"Clearly all the data and all the studies show that the death penalty is applied with racial bias, particularly in Florida," Shaw said. "This is still the case and has always been the case, and by standing against the death penalty, State Attorney Ayala is standing with communities of color."

Photo: Members of the Florida Legislative Black Caucus, led by Sen. Perry Thurston, D-Lauderhill, call on Gov. Rick Scott to rescind an executive order removing the Orange-Osceola state attorney from a case after she said she would not seek the death penalty. (Michael Auslen, Times/Herald)