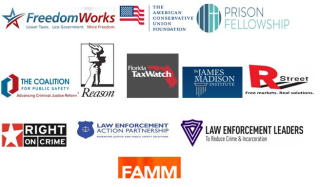 More than a dozen conservative groups sent an appeal to House Speaker Richard Corcoran, Senate President Joe Negron and the chairs of several legislative committees Friday, urging them to get behind legislation reforming the state's minimum mandatory sentencing law, which they have concluded are "costly to taxpayers" and "harm families and communities."

"In the last 15 years, more than 30 states around the country – Florida among them – have reconsidered the wisdom of disproportional mandatory minimum sentencing laws.'' the coalition wrote. "These centralized, one-size-fits-all laws undermine individualized consideration in the American justice system. They also waste taxpayer dollars locking up for far too long some people who pose little to no threat to public safety."  Download 2017 Florida Sentencing Reform Support Letter (Corcoran)

The letter does not mention the pending bills they support but, according to Greg Newburn, state policy director for Families Against Mandatory Minimums (FAMM,) the proposals that most align with their goals are HB 731 by Rep. Katie Edwards, D-Plantation, and Sen. Jeff Clemens, D-Lake Worth. The legislation would reduce mandatory minimum sentences for certain drug trafficking offenses. Neither bill has been given a hearing and there is no staff analysis developed for them.

"The result has been uniform: smaller prison populations, smaller corrections budgets, and lower crime. Florida’s families and taxpayers deserve the benefits of this proportional and restorative approach,'' they said.

Newburn said they are supportive of other legislation that has gotten a hearing in the Senate, such as SB 458 by Sen. Jeff Brandes, R-St. Petersburg, that would create a criminal-justice reform task force to make recommendations about sentencing and corrections policy.