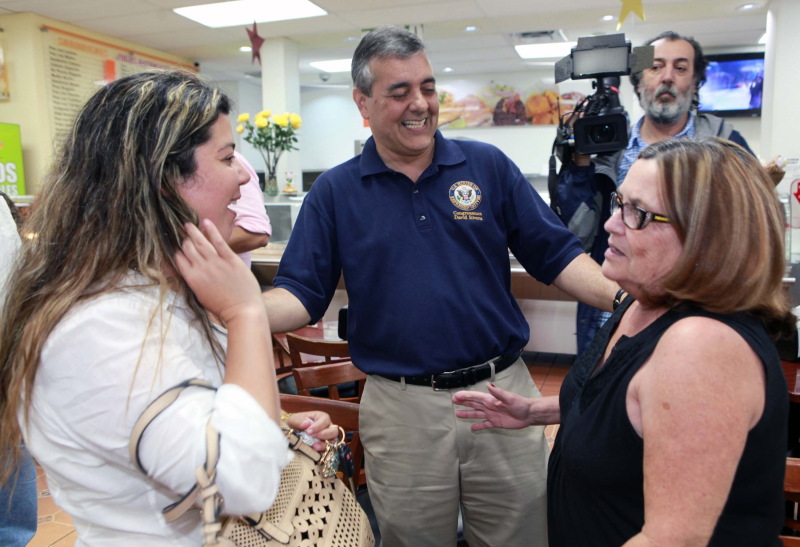 David Rivera wants to run for the Florida House of Representatives again, after having lost a narrow race in a recount last year.

Rivera, a former state legislator and congressman turned perennial candidate, submitted candidacy paperwork to the Florida Division of Elections on Wednesday. The Republican intends to run for House District 105, currently represented by term-limited Rep. Carlos Trujillo -- who, as it happens, holds the position that once made Rivera so powerful in Tallahassee: budget chief.

Trujillo is still holding out hope he might be named as an ambassador to Panama or Argentina under President Donald Trump -- something he has said would force him to vacate his two-year term after one year.

Another Republican, Ana Maria Rodriguez, has also filed to seek the seat.

A recount last November determined that Rivera had lost the House District 118 seat to a first-time candidate, Democrat Robert Asencio.

Rivera told the Miami Herald in a text message Thursday that he's running again "to continue serving my community." He later telephoned to add, "And I was asked to run by many constituents."

What he's been doing professionally since being ousted from Congress in 2012 is unclear. He says he's a business development consultant.

By the time the 2018 election rolls around, Rivera may no longer be dogged by a federal criminal investigation into the 2012 congressional election. He is suspected of orchestrating an illegal campaign finance scheme against one of his rivals in the Democratic primary. The statute of limitations for prosecutors to charge Rivera will expire later this year; the U.S. attorney's office in Miami has shown no signs of an upcoming indictment.

Still pending against Rivera is a state ethics fine of nearly $58,000 that has yet to be imposed by House Speaker Richard Corcoran. Rivera had preemptively challenged the legality of the penalty to the Florida Supreme Court, but the justices rejected his appeal in December, because Corcoran hadn't actually fined Rivera.

The Florida Commission on Ethics recommended the fine after finding that Rivera, as a state legislator, failed to properly disclose his income and double-billed taxpayers when improperly seeking a travel reimbursement paid for by his campaign account. Rivera has denied any impropriety.

The ethics investigation began in 2010, after the Miami Herald found problems in Rivera's financial disclosure reports. The review was put on hold until after the Florida Department of Law Enforcement and Miami-Dade state attorney's office probed for criminal wrongdoing in Rivera's finances. Prosecutors found Rivera appeared to live off his campaign account but never charged him citing an ambiguous law.

Rivera's latest candidacy filing will allow him to open a new campaign account. As treasurer, Rivera listed himself.