Despite opposition from Miami and Miami-Dade and a group of beach communities, a Florida House subcommittee on Tuesday passed a bill that prevents cities and counties from passing any new ordinances that restrict vacation rentals of private homes.

The 9 to 6 vote by the Careers & Competition Subcommittee sends the controversial bill to the 30-member Commerce Committee, which is top-heavy with lawmakers from South Florida where opposition to short-term vacation rentals has been most intense.

The bill (HB 425), sponsored by Rep. Mike LaRosa, R-St. Cloud, prevents local governments from imposing new restrictions on vacation homes. Local ordinances that were in effect on June 1, 2011, could remain, but restrictions adopted after that date, including laws based on a 2014 legislative compromise, would be declared "void and unenforceable" by the state and wiped off the books.

"This industry has been under attack," LaRosa testified. "Individuals' private property rights have been violated."

LaRosa noted that homeowners have filed claims for damages under a state property rights law known as the Bert Harris Act. He also cited a Miami Beach ordinance that imposes fines of up to $20,000 for violations.

"We view it as an attack on home rule," said Kerri McNulty, an assistant city attorney for Miami. "We are being inundated with calls from our residential neighborhoods who are complaining about these short-term rentals which are essentially businesses ... We need to be able to regulate them."

The parade of opponents included the Florida Association of Counties, Florida League of Cities, Flagler County, the Greater Miami and the Beaches Hotel Association, and the cities of Bradenton Beach, Daytona Beach, Holmes Beach and Lake Worth.

Supporters included the Florida Association of Realtors, Florida Chamber of Commerce, Americans for Prosperity and HomeAway, a nationwide online vacation booking platform seeking to expand its market in Florida, one of the world's hottest tourist destinations. 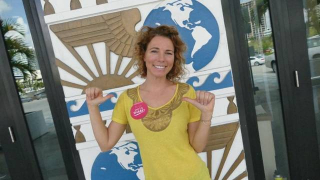 One of the strongest supporters of the bill was Marcie Mascaro (in photo), who drove to Tallahassee from Miami and complained of efforts by the city to levy steep fines on short-term rental properties. A single mother of two sons, she said she has hosted hundreds of guests in her home and has never had a nuisance complaint.

"Hosts like me want legitimacy," Maascaro said. "Let us give our guests a temp place to call home that tramscends a traditional stay. Let us decide how we keep our home including who, when, for how long and for how much."

Opponent Ruth Uecker of Anna Maria, an island tourism community in Manatee County, told lawmakers: "We do not want to overly regulate usage nor interfere with property rights, but we do want to retain the tools we have to solve local problems."

Three Republicans voted against the bill Tuesday, all of them in areas of growing tension between residents and rentals: Reps. Larry Ahern of Seminole, Paul Renner of Palm Coast and Randy Fine of Palm Bay.

Tuesday's debate centered in part on whether vacation rentals are homes or businesses. LaRosa and other supporters of the bill said they are homes, but opponents noted they are regulated, the same as hotels, by the Department of Business and Professional Regulation.

"They are called public lodging establishments in statute," said Eric Poole of the Florida Association of Counties.

The bill's next and final stop before the House floor will be the Commerce Committee chaired by Rep. Jose Felix Diaz, R-Miami, and includes four other members from Miami-Dade, four from Broward and five Tampa Bay lawmakers: Democrats Sean Shaw and Republicans Jamie Grant, Jackie Toledo, Blaise Ingoglia and Kathleen Peters.

Peters, of Treasure Island, represents a group of North Pinellas coastal communities and is an ardent supporter of the cities who says she would be voted out of office if she supported LaRosa's bill.

Tampa Mayor Bob Buckhorn, a Democrat, said the rentals bill is one of a number of examples of the Republican Legislature's contempt for home rule.

"It's an all-out assault on local government and our ability to self-govern," Buckhorn said, "and this is coming from the same people who say the government that's closest to the people is most effective. That would be us."