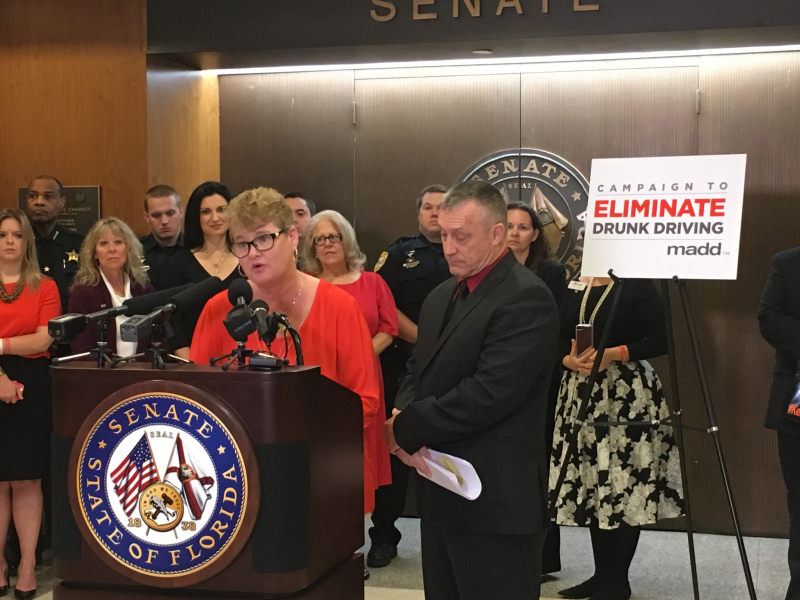 One year ago, Hillsborough Sheriff's Deputy John Kotfila Jr. was killed by a drunk man driving the wrong way down the Lee Roy Selmon Expressway.

It's a death that rocked the Tampa Bay law enforcement community -- and one that could have been prevented, his family and anti-drunk driving advocates said in the state Capitol Tuesday.

Alongside the Kotfilas, representatives of Mothers Against Drunk Driving urged the Legislature to require first-time DUI offenders to have an ignition interlock device installed in their cars for six months. The devices essentially operate as a breathalizer test that prevents a car from starting if the user is intoxicated.

Sen. David Simmons, R-Altamonte Springs, and Rep. Cord Byrd, R-Neptune Beach, have sponsored legislation (SB 918/HB 949) to do that this year. Neither has had a single hearing, and the Senate bill has to clear four committees, a requirement that usually signals a tough road to passage.

Current Florida law requires interlock divices for repeat offenders and those convicted of DUI with a blood alcohol level above .15 or with a minor in the car.

"There is never ever going to be a silver bullet to stop this, but I have to tell you that the ignition interlock is the best, strongest, fastest way that we can help prevent a 100 percent preventable crime," she said.

The man who killed Kotfila, Erik Thomas McBeth, was more than three times the legal blood alcohol limit during the crash, which killed both men.

The ignition interlock bill is limited only to people who have been convicted of DUI.