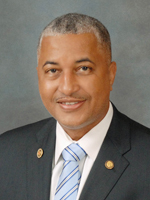 Former state Rep. Dwayne Taylor, a Daytona Beach Democrat, was indicted Thursday by federal prosecutors for falsely claiming thousands of dollars in campaign expenditures in order to conceal cash withdrawals and checks written to himself in violation of state law.  Download Taylor Indictment

Taylor, 49, was charged with 9 counts of wire fraud. If convicted, he faces a maximum penalty of 20 years in federal prison for each count, according to a statement released by U.S. Attorney A. Lee Bentley, III, of the the U.S. Attorney in the Third District.

According to the grand jury indictment unsealed Thursday, Taylor appointed himself his campaign treasurer on 2012 and 2014, withdrew $2,440 in his petty cash fund in 8 different instances between June 2012 and August 2016 and one check valued at $400. He then deposited the funds into his personal bank account.

The indictment claims that Taylor also wrote checks to himself and write on the memo line that the funds were for petty cash. He fraudulently obtained $62,834 in campaign funds, exceeding the state law that allows for $100 a week in petty cash expenses that must include only office supplies, transportation and other necessities, the indictment claims.

Taylor served on the Daytona Beach City Commission from 2003 to 2008 and served in the Florida House from 2008 to 2016, when he sought election to the U.S. House to represent the 6th Congressional District. He was defeated in the primary.

State law prevents a candidate his or her spouse from using campaign funds to defray normal living expenses for the candidate or the candidate’s family, other than expenses actually incurred for transportation, meals, and lodging during travel in the course of the campaign.

This case was investigated by the Federal Bureau of Investigation. It will be prosecuted by Assistant United States Attorneys Embry J. Kidd and Roger B. Handberg, according to the statement.