« Miami Republicans to Iowa's Steve King: 'Get a clue' | Main | Rick Scott back on the road to keep heat on Florida House members » 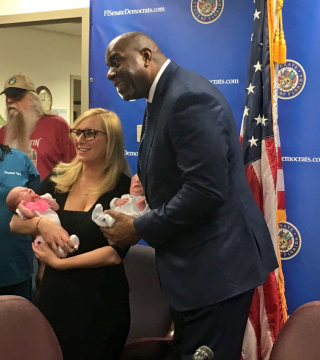 Earvin “Magic” Johnson, the NBA star, is lobbying state lawmakers on a health care agenda and awareness of HIV/AIDS.

Monday morning, he told Senate Democrats about a need for better dental care for children and emphasized his work on HIV. Johnson left the Los Angeles Lakers in 1991 after announcing that he was HIV-positive. Since then, he has been an advocate for better treatment and open discussion about the disease.

“What we were able to do was have so many effective town hall meetings of people who were living with HIV and AIDS and that sort of had them say, ‘Okay, maybe I can come out to my family that I do have HIV and people will accept me and people won’t discriminate against me,’ ” Johnson said.

Johnson came to the state Capitol with another motivation, however: He is an investor in Simply Healthcare Plans, which holds an expiring state Medicaid managed care contract and has a plan specifically for Medicaid recipients living with HIV/AIDS.

Johnson and Simply Healthcare’s top brass were scheduled to meet with Republicans, as well.

In recent years, this state -- and South Florida especially -- has experienced high rates of HIV. Senate Democrats, along with a few outspoken Republicans, refused to confirm Surgeon General John Armstrong last year after Times/Herald reporting showed that the state Department of Health was making staffing cutbacks while not emphasizing the HIV outbreak.

"Progress has been made," said Senate Democratic Leader Oscar Braynon of Miami Gardens, who was critical of Armstrong and has led the charge on needle exchange programs as a way to combat the spread of HIV. "Now, it's definitely something that's on (DOH officials') tongues, something that they're talking about. I think the next step is some of the reasons why we have such high rates, like the opioid crisis."

In the Democratic caucus, he found lawmakers eager to find a connection with one of basketball’s greatest stars. Sen. Randolph Bracy, D-Ocoee, played basketball at College of William and Mary. Said Sen. Bill Montford, D-Tallahassee, “I grew up as Magic Montford."