« Some religious schools could be allowed to have guns | Main | Execs to state: Fix water quality or tourism and boating will suffer »

In a highly partisan clash, a key House committee voted Wednesday to deny food stamps to an estimated 229,000 Floridians, most of them children and including seniors, veterans and people with disabilities.

The House Appropriations Committee passed a bill (HB 581) by freshman Rep. Frank White, R-Pensacola, that would restore income eligibility for households for food stamps to 130 percent of the poverty level, the minimum level set by the federal government. The household income standard was raised to 200 percent of poverty following the Great Recession of 2008 and 2009, which expanded the population eligible for food stamps. Florida remains one of 43 states with that broader eligibility standard.

The change being considered by the Legislature would deny eligibility to an estimated 229,311 recipients, or 6.8 percent of the current statewide total, beginning Jan. 1, 2018. The federal program is officially known as SNAP, for Supplemental Nutrition Assstance Program.

"I think every tax dollar is sacred," White told lawmakers. "We should spend those tax dollars as if they are our own." 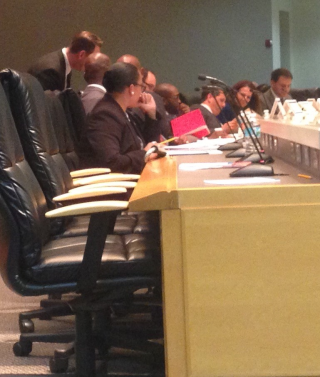 Before the bill passed on an 18-9 party-line vote, most Republicans on the committee were silent during a lengthy debate while Democrats railed against the legislation, as Rep. Jared Moskowitz, D-Coral Springs (standing) talked strategy with his colleagues.

"Food is a basic need, and hunger is a real problem," said Rep. Cynthia Stafford, D-Miami.

Said Rep. Bobby DuBose, D-Fort Lauderdale: "We're picking winners and losers when we're dealing with folks who are low income. At the end of the day, poor is poor."

State data shows that even as the economy strengthened in recent years, the number of food stamp recipients outpaced population growth: 18.5 percent of Floridians were on food stamps in 2015.

The panel's chairman, Rep. Carlos Trujillo, R-Miami, said the bill is needed to reduce food stamp fraud by verifying applicants' eligibility, and he described seeing people in grocery stores in Miami with "a Mercedes key chain and their SNAP card."

Florida has consistently received bonuses from the federal government for having one of the lowest error rates of any state, the House analysis said. Through 2014, the state had received bonses for seven straight years, totaling $54 million.

The cost of the food stamp program is borne by the federal government but operational costs are shared between the feds and states. White's bill includes a $300,000 grant to a private vendor to make technology changes to computers at the Department of Children and Families to verify applicants' assets to reduce fraud. During a testy exchange, Trujillo chided Democratic Rep. Lori Berman for the way she framed her questions. "'People being hurt' is a subjective opinion," Trujillo said.