Richard Corcoran on Rick Scott: 'A governor who won't help us'

Workers' comp is not a very sexy issue, but it's a major concern for Florida businesses.

As the 2017 legislative session reaches the midway point, it's unclear whether businesses and workers will get real help from the Legislature in response to court decisions that led to a double-digit increase in rates and struck down parts of the comp law as unconstitutional.

The Senate Banking & Insurance Committee on Monday will hear Sen. Rob Bradley's bill (SB 1582) in the fifth week of session, a 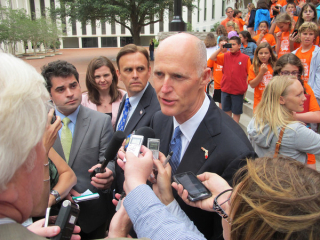 t the end of a long agenda. That's too late for House Speaker Richard Corcoran, R-Land O'Lakes, who says the Senate needs pressure from Gov. Rick Scott on the issue but has gotten only silence. Corcoran says Scott is fixated on saving Enterprise Florida and Visit Florida when the bigger threat to jobs are workers' comp rates and the rise in property insurance premiums arising from abuses in a system known as assignment of benefits.

"We've got problems in the Senate, and we've got problems with a governor who won't help us take this burden off the backs of our small businesses," Corcoran told the Times/Herald. "If the governor would get more active and start traveling the state, talk about the stuff that's really going to cost us jobs." Repeating a familiar theme, Corcoran said: "Handing over million-dollar contracts to Pitbulls and Emerils and the insider dealing that goes on is not how we bring tourism here."

This is not the first time Scott has been criticized for a lack of engagement with the Florida Legislature. But after placing Enterprise Florida on the political chopping block, Corcoran now faults Scott for trying to rescue a program he says is working.

"It is important to know that the bills fast-tracked through the Florida House have been job killers and detrimental to Florida's active military, veterans and their families by eliminating the Florida Defense Alliance," the statement said. "It is unfortunate that the Florida House continues to allow politics and not the livelihoods of Florida families drive their agenda." The statement said that last year, Enterprise Florida -- the agency targeted for extinction by Corcoran -- "worked with over 2,700 small and medium sized businesses to connect them with international partners and help them grow."

Scott's office cited the work of Insurance Commissioner David Altmaier in addressing escalating insurance premiums. Nowhere in the statement was workers' comp mentioned, but his office said Scott "is always interested in policies that reduce costs for Florida businesses and families."