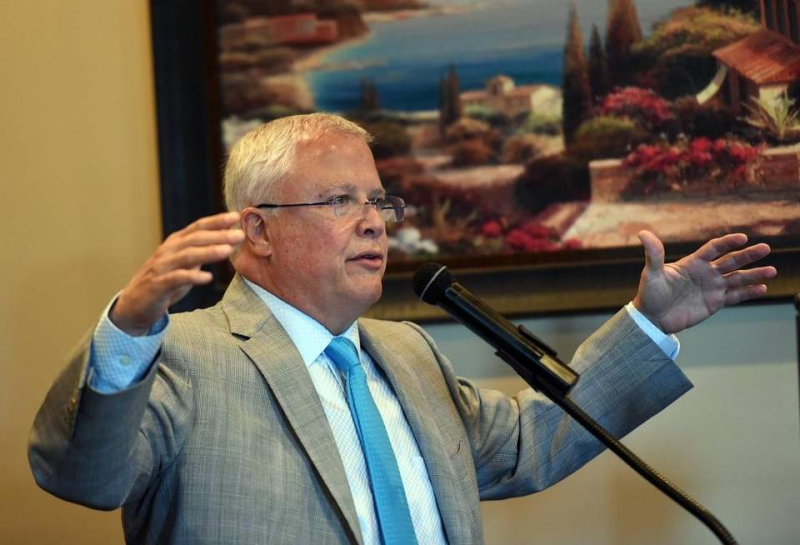 Gov. Rick Scott has named Sarasota businessman Carlos Beruff to be the chairman of the powerful Constitution Revision Commission, the 37-member commission that will be dominated by Scott appointees which has the power to put proposals directly onto the 2018 ballot.

Last year, Beruff, 58, a Republican who has never held elective office, spent more than $8 million of his own money in an unsuccessful, long-shot, bid to unseat U.S. Sen. Marco Rubio. He has been a heavy contributor to Scott's election efforts as he was to former Gov. Charlie Crist, who appointed Beruff to the Sarasota-Bradenton Airport Authority in 2009 and the Southwest Florida Water Management board and the State College of Florida board of trustees.

Scott has the power to appoint 15 members to the 37-member commission as well as the powerful position of chairman. When the CRC last convened in 1997-98, then-Gov. Lawton Chiles made his general counsel Dexter Douglass the chair. Douglass set up a task force before the commission met that laid a governing foundation for the citizens panel. He was credited with establishing a rules process and successful vetting system for commission proposals that resulting in the panel successfully winning approval for most of its recommendations.

Scott has not created a similar task force. He said he will make his remaining 14 appointments in the next few days. Shortly after his appointment, Beruff named Jeff Woodburn, Scott’s Policy Director, to serve as the CRC's  executive director beginning March 2. The executive director is responsible for serving the chairman of the CRC and organizing the work of the commission, including the coordination of public meetings and the facilitation of the commission’s agenda among its 37 members.

"My goal for the CRC is to fight for policies that will ensure a strong future for Florida and I know Carlos also shares this vision,'' Scott said in a statement. "As we undertake this historic review, I am hopeful that this Commission will propose policies that build a legacy upon which the families and businesses in our great state will thrive for generations to come."

Beruff, a tough-talking son of Cuban immigrants, built a home-building business worth more than $150 million.

From the governor's press release:

The son of Cuban immigrants, Carlos Beruff is a native Floridian whose business sense and hard work have allowed him to build an incredibly successful career in both his private business and the public sector. At age 22, Mr. Beruff started his first business and over time, Medallion Home became one of the most respected companies in Manatee and Sarasota Counties. During his more than 35-year career as a business owner, Mr. Beruff has built more than 2,000 homes and developed, owned and managed dozens of other properties, employing thousands of people in the process.

In addition to his work in the private sector, Mr. Beruff has volunteered his business experience, giving back to his community to bring real solutions to the problems facing Floridians. Mr. Beruff has previously served on the Board of Trustees of the State College of Florida (SCF) and the Southwest Florida Water Management District, helping these organizations to cut government bureaucracy and wasteful spending – saving millions in taxpayer dollars. Mr. Beruff also served as the Chairman for Governor Scott’s Commission on Healthcare and Hospital Funding. Currently, Mr. Beruff is a commissioner on the Sarasota Manatee Airport Authority Board, a position he was appointed to in 2008 and reappointed to by Governor Rick Scott.

Under the email FLCRC.gov, the following release was also released:

Today, Carlos Beruff, the chairman of the Constitution Revision Commission (CRC), announced that Jeff Woodburn, currently Governor Rick Scott’s Policy Director, will serve as the executive director for the commission beginning on March 2, 2017. The executive director is responsible for serving the chairman of the CRC and organizing the work of the commission, including the coordination of public meetings and the facilitation of the commission’s agenda among its 37 members.

CRC Chairman Carlos Beruff said, “Jeff’s legal and policy expertise will be of tremendous value to us as we embark on the historic work of the Constitution Revision Commission. He has served Governor Scott in various leadership capacities since 2011, and he has one of the sharpest policy minds of any person in this state.”

Jeff Woodburn has served as Governor Scott’s Policy Director since November 2014. Before that, he served as the Department of Business and Professional Regulation’s (DBPR) Deputy Secretary under then-Secretary Ken Lawson. Woodburn began serving Governor Scott early in his administration as a deputy policy director in the Office of Policy & Budget, a post he held from September 2011 to July 2013. Before serving Governor Scott, Woodburn worked as an attorney for the Florida House of Representatives. Woodburn has a law degree from Florida Coastal School of Law in Jacksonville and a Bachelor of Art degree in political science from the University of Florida.