Sen. Frank Artiles updates his report to reflect nearly $2,000 in travel, food and expenses from FPL 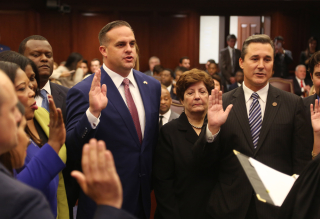 Florida Power & Light's paid nearly $2,000 in flights, food and beverage for Sen. Frank Artiles to travel to Daytona Beach and Disney's Epcot theme park last month, an expense the senator reported late Monday on his political committee's web site only after questions by the Herald/Times.

Artiles, a Miami Republican who as a freshman is chairman of the Senate's Energy, Communications and Public Utilities Committee, was invited by FPL parent company, NextEra, to wave the green flag at the ceremonial start of the NASCAR event on Feb. 24. The next day, he was seen at Epcot, touring the theme parks' Drinking Around the World Showcase with FPL lobbyist and others.

Artiles' travel "was an in-kind contribution to Veterans for Conservative Principles by Florida Power & Light,'' said his aide, Alina Garcia in an email after the Herald/Times asked how the expenses were paid.

Artiles traveled on a plane owned by Dave Ramba, who also lobbies for FPL. Ramba uses his aircraft to provide legislators with air travel around the state and to and from Tallahassee. It is known as "the caravan" because it is a Cessna Caravan and can seat up to 8 people.

Ramba had parked the caravan at the Kissimmee Jet Center, the fixed base operator closest to Disney, during the weekend of the Daytona 500, which Ramba attended on Sunday. The NextEra-sponsored truck race on Friday night was the opening event of the Daytona International Speedway weekend, which culminates in the Daytona 500.

Also accompanying Artiles was John Holley, who has been director of state legislative affairs for Florida Power & Light since August 2011 and previously worked for three months as a lobbyist with Ramba's Tallahassee lobbying firm. Artiles said he has known Holley for seven years and considers him a loyal friend.

When the Herald/Times asked how he paid for the trips on Ramba's aircraft, and whether he included payment for others Artiles identified as staff, Artiles refused to speak to a reporter.

"Everything in writing from this moment forward and I'll get you answers from my staff,'' he said, repeating four times that he wanted questions in writing.

In response to questions, Garcia told the Herald/Times that "there were no legislative interns or interns on the plane or traveling with the senator" and that "Sen. Artiles was traveling unaccompanied."

Senate rules require that senators receive prior written approval from the Office of the Senate President if they are seeking to have their cost of traveling on chartered aircraft reimbursed by taxpayers and Senate staff is not allowed to travel on charter aircraft. Artiles accepted the travel as an in-kind gift to his political committee and it is the only in-kind gift listed since September 2013. The Senate president's office said that Sen. Artiles does not employ any interns through his state office.

Artiles said that a fundraiser he held in conjunction with the NextEra-sponsored truck race raised $10,000. He acknowledged that before the event he “did not know that NextEra was the parent of FPL.” On March 2, Artiles' political committee reported receiving $5,000 from FPL and $5,000 from Florida Prosperity Fund, a political committee controlled by Associated Industries of Florida to which FPL contributes.

Artiles' committee also reported writing two checks to Ramba on March 2: one for $900 to the Ramba Law Group for "legal" and another for $1,800 to Ramba Consulting for "consulting." Senate rules require members to report all contributions and expenses to their political committees on their web sites. Artiles updated his political committee with the in-kind contribution on Monday, after the Herald/Times inquiries.

UPDATE: Ramba said his firm received the "in kind letter on the 24th; it was dated and sent to the committee on the 22nd. Unfortunately, it was sent to me and didn't copy my staff so it was a clerical error it was not put on the PC website."

Here are the screen shots from the web page for Veterans for Conservative Principles first on Monday morning and next on Tuesday morning: