« Summer is coming. So is Zika. | Main | Lawmaker: House should 'put Florida Supreme Court in position of telling us that we're wrong' » 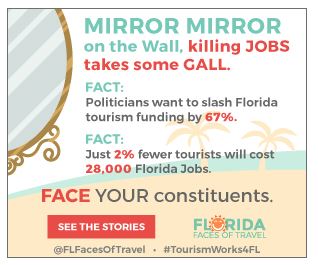 A coalition of travel industry groups have partnered together to fund ads on the internet and a website directing supporters to talking points to counter state legislators and giving easy links to office addresses and telephone numbers of state legislators to make sure they don't follow through on threats to cut tourism spending.

"Mirror mirror on the wall killing jobs takes some gall," one of the web-based ads on the internet says.

Of course, House Republican leaders insists they are not going after Visit Florida's state funding to kill job. Instead, State Rep. Paul Renner, the lead sponsor of the legislation targeting the agency, said his efforts are in response to the embarrassing situations that Visit Florida has put the state in of late. The Flagler County Republican has specifically cited a secret $1 million contract with music star Pitbull to promote Florida as a "Sexy Beaches" destination as proof.

Renner's bill calls for stricter regulations on Visit Florida and would prevent the agency from ever entering into another contract of that size without first getting legislative approval - something no other agency is required to do. His plan would also require Visit Florida to get a private match of every dollar they receive from the state - a restriction Visit Florida has said will cost them millions of dollars because they rely on in-kind matches from the private sector, not hard dollars.

The web ads and website - Floridafacesoftravel.com -  is backed by the Florida Restaurant and Lodging Association, the Florida Associations of Destination Marketing Organizations, and the U.S. Travel Association.

Those groups have also been a part of rallies like the one on Tuesday in the Florida Capitol with Gov. Rick Scott and the elected members of the Florida Cabinet.

"Do Florida lawmakers really want to tell the 1.4 million Floridians depending on the travel industry, most of them middle-class wage earners, that their jobs don't matter," said Roger Dow, president of the U.S. Travel Association and a Pinellas County resident. "We think not, and that's why this campaign is so important."