What Florida politicians thought of Trump's speech to Congress 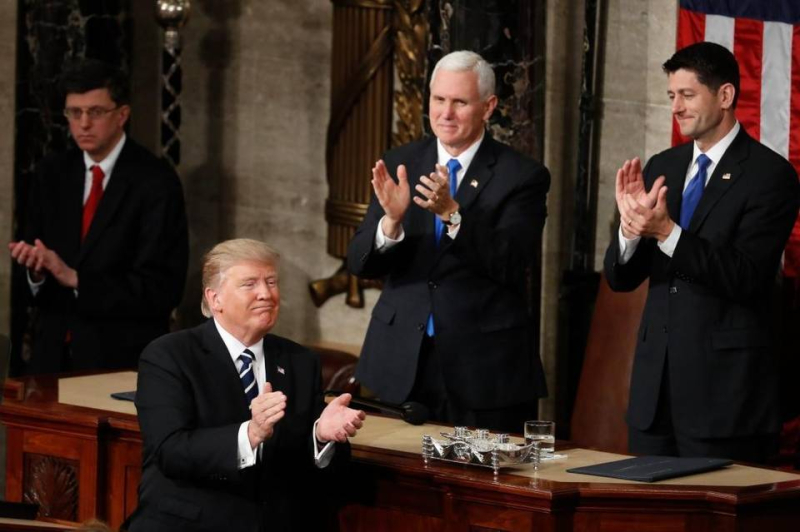 We heard a lot from President Trump tonight, but the numbers speak for themselves. Forty days after his inauguration, we still have yet to see President Trump and the Republican Congress lift a finger to create jobs or help hard-working Americans. Instead, we have a leader who is alienating Americans instead of bringing people together. Trump and his administration are in a hurry to repeal the Affordable Care Act even if it makes America sick again and leaves 30 million people without life-saving health insurance. That is unacceptable. Our country deserves better than a bunch of broken promises from our President. Now is the time for all of us in Congress to roll up our sleeves and figure out a way to work together in order to improve our economy, create more jobs, and do right by the people who sent us here to bring civility back to our government.

I am disappointed the President did not use this opportunity to offer a concrete plan to unify the country and Congress to grow the middle class, strengthen education, make health care more accessible and affordable, and safeguard our nation. However, I am optimistic there are opportunities for the President and Congress to work together.  I am especially pleased to hear that the President wants to make childcare accessible and affordable, ensure parents obtain family leave, invest in women’s health, and rebuild our infrastructure. Earlier this month, some of my congressional colleagues and I requested a meeting with the President to discuss ways to improve our nation’s aging infrastructure.  If the President is serious about this issue, he will find a willing partner in me and many of my fellow Members of Congress. I continue to be concerned about the President’s undisciplined approach to national security, which undermines rather than enhances our safety.  I also did not see a realistic plan to replace the Affordable Care Act—only a politically-motivated effort to eliminate health care coverage for millions of Americans and send our health care system into chaos. Right now, the American public is calling for unity, cooperation, and results.  I stand ready and willing to work with the White House and both parties in Congress to put good public policy above partisan politics on issues where we can find common ground.  I encourage the President to do the same.

President Trump’s speech was as predictable as it was disturbing. Building up our military by gutting the safety net and our diplomatic efforts throughout the world makes us less safe, not more. Repealing the ACA will have a devastating impact on the millions who will lose their healthcare, seniors whose prescriptions will cost more, and everyone who gets their insurance at work when their policies lose protections against insurance company abuses. An immigration plan that builds a wall, creates a deportation force, and demonizes immigrants ignores our history as a country of immigrants as it tears families apart. Finally, I appreciate the President’s condemnation of the anti-Semitic attacks targeting Jewish institutions, but one speech is not enough. I expect him to follow actions with words by preparing a comprehensive government response to this epidemic of hate.

For the first time since I've been in the Senate, Republicans are poised to enact real, meaningful and lasting reforms to protect Americans, rebuild our military, grow our economy, boost workers’ paychecks, replace ObamaCare with a better system, and remove the roadblocks to prosperity created by bureaucrats in Washington. The president has partners in both the House and Senate to pursue this bold agenda, and I was encouraged to see him make his case to the American people and urge Democrats to stop standing in the way of progress. I was especially pleased the president highlighted tax reform and replacing ObamaCare as top priorities, and I’m hopeful that in the coming months, we’ll be able to work together and put in place a simpler, fairer tax code that is both pro-growth and pro-family. Fixing our broken immigration system is crucial for our security and economic future, and I’m hopeful we can work in a bipartisan way to take the first necessary step in this process, which is securing our border and improving interior enforcement. As we work towards these goals, I’m sure there will be disagreements, but I’m more excited than ever about serving in the Senate at this moment in our nation’s history and the opportunity to improve the lives of all Americans.

In his speech tonight, the President outlined a bold Republican agenda that the American people voted for in November. I look forward to working with my party and the President to rebuild and reinvest in our crumbling infrastructure, fix our broken health care system, and make it easier for American companies to do business here. After eight long years of serving in Congress under President Obama, I am optimistic about this important opportunity for Republicans to prove to the American people that they come first and we can get the job done.

Tonight, we heard the President outline his optimistic plan for the country, which included tackling the tough issues of tax and regulatory reform, fixing our broken health care system, rebuilding our military, and keeping our commitment to our veterans. I commend President Trump for keeping his promises and working hard to address the issues that are most important to hardworking Americans. We have been hard at work in the House to get America back to work and truly fix the problems incurred over the last 8 years. I have no doubt that the House will continue to keep up the momentum of the past 2 months and work with the President to accomplish these goals, and truly make America great again.

We live in an incredible country where we can all voice our concerns and play a role in the direction of the United States. Last week, I hosted a four-hour town hall meeting where I stayed to answer every question, and it’s clear that people are passionately engaged. Tonight, I was glad to hear a vision of bipartisanship to try to bridge differences that exist. While we may not agree on every issue, I do believe there is more that unites us than divides us, by far. I share a desire with all Americans to make our communities and our country safer. As a 12-year Army veteran injured fighting for a country I love, I know as well as any that our enemies in the Middle East literally want to destroy our way of life. Ensuring our military has the resources needed to protect our country and that our veterans have the resources they need when they return home are absolutely critical priorities in the President’s budget request. I also share a desire with all Americans to leave the next generation in a better place than we are now.  For far too long, Washington has avoided the responsibility to set and live by a budget—a responsibility that families and small businesses are forced to take on every year. Tax-more, spend-more policies have seriously jeopardized our children’s future by driving our country deep into debt. We must work together, with Members on both sides of the aisle, to restore fiscal sanity in Washington—asking government to do more with less instead of asking the American people to do with less. Reducing our debt alone is not enough. Improving our country for our children’s generation also means working to improve our schools, protect our environment, strengthen Social Security and Medicare and more.  I am deeply alarmed by reports of severe, across-the-board cuts to the EPA and other agencies that are critical to our quality of life in Florida. On behalf of our community, I will continue working to hold the Administration accountable for any actions that threaten our environment and our way of life. I’m committed to working with anyone who shares this positive vision for our country and who wants to make Washington work for the American people again. Together, we must put people before politics.

One by one, President Trump has been checking off the promises he made to the American people. He is doing exactly what he said he was going to do, and tonight’s address solidified his commitment to the prosperity of our nation. He laid out an optimistic vision for our country that crosses party lines in the service of a stronger and brighter America. We all share a desire for safe communities for our families. We want our children to have access to good schools. And all Americans deserve good jobs that allow them to succeed and dream. For far too long, these fundamental desires have been out of reach for so many people. The time is here to provide relief for hardworking Americans that allows them to feel safer, keep more money in their pockets, and make personal decisions that are best for them and their families. Together with President Trump, Congress will pass and implement a bold agenda that will repeal and replace the failed laws of Obamacare, reform our tax code, increase our national security, rebuild our military, protect our veterans, and provide school choice. I am excited to work with a president who has our nation’s security and best interests in mind so we can fix our problems and build on this renewed American spirit. I encourage my colleagues on both sides of the isle to unite in action that is firmly grounded in achieving these goals and upholding our commitment to those who sent us to Washington to represent and protect them.

As promised, President Trump’s address tonight was upbeat and presidential. In keeping with comments made during the campaign, he outlined his vision for reviving our economy – including investing in infrastructure and removing regulations that are crushing small businesses and stifling job creation. In just five weeks, working together Congress and President Trump have already cut $2.8 billion by rolling back over-burdensome regulations. The President’s commitment to improving infrastructure offers unique opportunity to build 21st century infrastructure for our district and America. The President is right, Obamacare is imploding. We must repeal and replace it with a 21st century healthcare system that provides Americans with the care they need, from the doctor they choose, at a price they can afford. I was thrilled to see Floridian, Denisha Merriweather, as one of his special guests.  Her story is a great example of the power of school choice.  It has transformed the lives of countless students in Florida and can transform American education. I couldn’t agree more with President Trump’s comments on the power of education.  His support for school choice is great news for every parent who is seeking the financial freedom to send their child to the school that meet their needs.

The President’s Joint Address tonight called for unity, laying out an optimistic and forward-looking vision of America. One message was clear: We can keep our promises and do right by the American people if we work together.  I look forward to working with the Administration, and my colleagues on both sides of the aisle in Congress, to improve care for our nation’s Veterans, support our men and women in uniform, secure our borders, invest in medical research, fix our infrastructure, and much more.