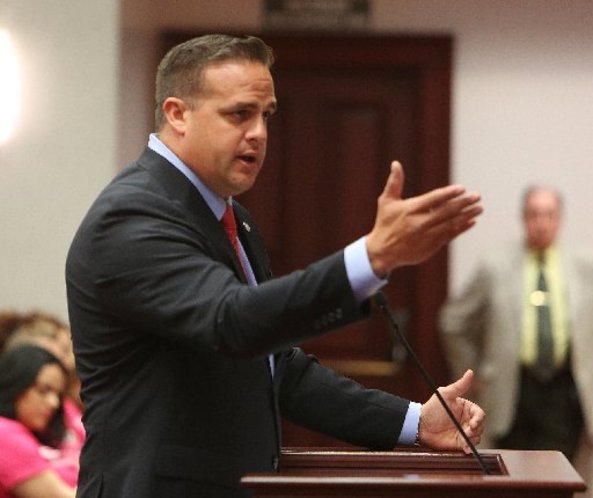 Miami Republican Sen. Frank Artiles may have said he's not resigning minutes after he apologized Wednesday for earlier using a racial slur and directing profanity at another senator.

But other groups are calling him to quit. Others are criticizing how Artiles apologized.

Here's a mid-afternoon sampling of the fallout:

"We call on Senate Leadership to demonstrate an authentic and unmistakable commitment to upholding a standard of basic decency by removing Artiles from office...His hateful personal views have infiltrated his public service and he cannot be allowed to remain in office. Senator Artiles' racist, sexist and anti-LGBTQ vitriol is unacceptable behavior for anyone, especially someone charged with representing the best interest of the people of Florida. There is no place for Frank Artiles in Florida’s democracy, just as there is no place for discrimination of any kind in Florida.”

Adora Obi Nweze, President of NAACP Florida State Conference and member of the National Board of Directors, at 2:10 p.m.

"The racial slur, profane language and degrading tone used to members of the Florida Legislative Black Caucus, in particular, a black woman, has no place in our society.  In 2017, it’s unfortunate we still must remind everyone about the “N” word and the negative impact it has had in the black community for many years.  A public apology is not good enough from a public official who has used racist language in the past. Do us a favor, take your racist language and racist actions and resign."

"The state senator from Miami should resign. He is obviously a bully, a man who, by his own admission, has anger problems, and, if not a racist, not afraid to use the language of racism. Indeed, what’s the difference?...Artiles, grasping at straws, blamed it all on being from Hialeah. We get it that Artiles meant to convey that he is from a blue-collar neighborhood where calling it as you see it sometimes supersedes sensitivity. But it was a double slap for him to imply his that his abhorrent behavior is accepted in a city well-known for it large Cuban-exile community. No, he should blame these latest troubles on his being coarse, insensitive, entitled and lacking in integrity to such as degree that by the time he delivered his second so-called “heartfelt apology” on the Senate floor Wednesday, days after the original offense, it was simply too late. Gibson, who never looked Artiles in the eye, wasn’t buying it. Neither are we."

Sen. Perry Thurston, D-Fort Lauderdale, on behalf of the Florida Legislative Black Caucus, which has 7 senators and 21 House members, in a letter to Rules Chair Sen. Lizbeth Benacquisto, after members voted to expel Artiles, at 12:30 p.m.

"Sen. Artiles' conduct justifies expulsion from the Senate, a remedy that is available under Rule 1.43."

"Frank Artiles' apology was weak, half-hearted and nowhere near enough. This is just the latest of many hate-filled tirades by Republicans in Florida and across the country. Senator Audrey Gibson is a respected leader who has served the people of Florida throughout her life and their must be a consequence for Frank Artiles' inadmissible actions. The Florida Democratic Party stands behind Senator Gibson and continues to call for Frank Artiles' resignation for his racist and misogynist remarks. Republican leadership must call on Artiles to resign and do something about the hate-speech that has taken over their party."

“Like many others, I am extremely disappointed in the inflammatory actions by Senator Artiles this week. The division and backlash that have followed should serve not only as a lesson in collegiality and professional ethics within the Florida Senate, but also as a lesson of respect, humility, and understanding of our state’s diversity. We are all brothers and sisters under the eyes of God, and we must therefore accept each other for what brings us together as human beings rather than what divides us. Words such as these are simply inexcusable and have no place in public service, the workplace, or our state.

Senator Artiles’ comments towards three highly respected public servants are wrong not only because of their use, but also because of his justification for using them based on where he’s from. As someone who also grew up in Hialeah and represents the hardworking families living there, my constituents and I would agree that this language is simply unacceptable. Senator Artiles owes the residents of Hialeah an apology for unfairly associating them with this kind of behavior.”

"Let this part sink in. Artiles called six people 'n----as' the night before Florida issued an apology for the Groveland Four...Removing Artiles from his chairmanship is not enough. He needs to resign from the Senate."