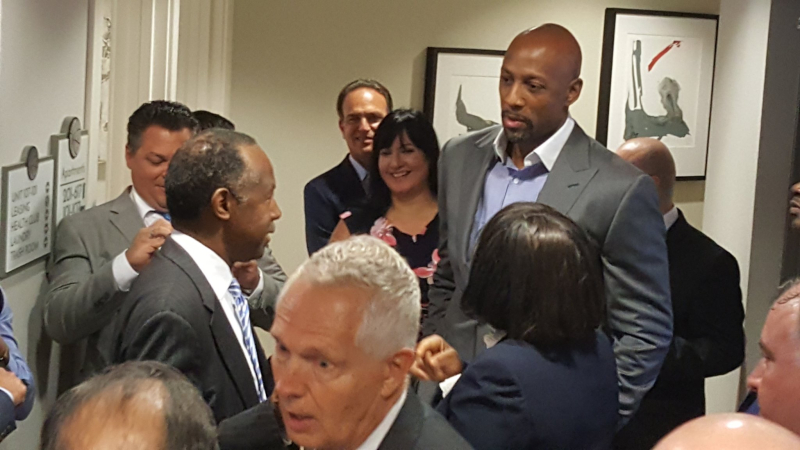 Carson, Miami-Dade County Public Housing Director Michael Liu and five other people got stuck inside an elevator Wednesday on the way down from a visit to the rooftop of the Courtside Family Apartments in Overtown.

Mourning was scheduled to greet Carson on his arrival to the location at 8 a.m. and join him on a tour of the $22.8 million facility, which opened in September. But Mourning was 15 minutes late, so Liu started the tour without him, playing a game of foosball with Carson in the building's rec room and showing him the facility's beautiful basketball court.

Mourning arrived just as Carson and Liu had squeezed into an elevator, along with other HUD officials, to check out the roof. But when the elevator descended safely to the ground floor, the doors jammed.

Carson took the incident in good spirits, smiling as he emerged from the elevator. Mourning apologized profusely.

"I sure you guys know where to find me," he told Carson by way of apology before the secretary left for his second stop of the day at Collins Park Apartments in Allapattah.

As he arrived at Collins Park, Carson was led into another elevator.

Great meeting w/ Alonzo Mourning who is doing great work with low income housing & thanks to the hard working @miamipd and @cityofmiamifire pic.twitter.com/tl5UtFUpXU