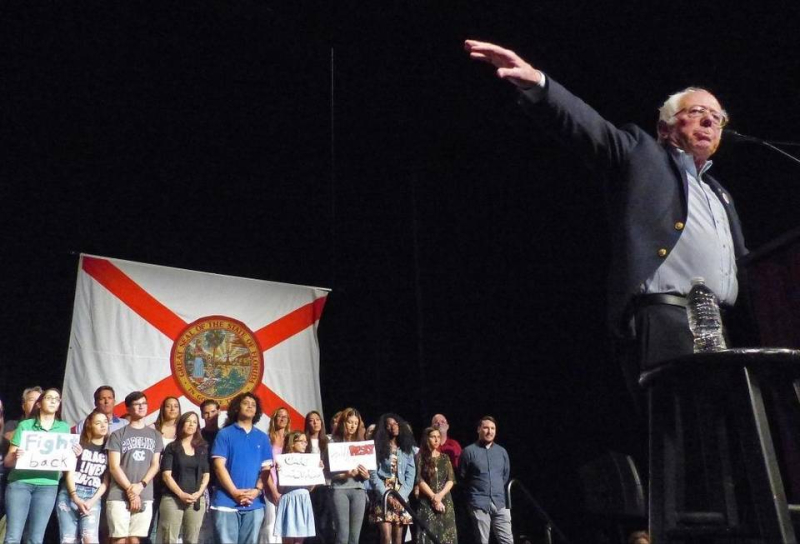 Independent Bernie Sanders was met with cheers in Miami Wednesday night as he called for transforming the Democratic Party into a grassroots force that will fight for the poor and middle class and push back against President Donald Trump.

“We are going to take on the billionaire class…” Sanders said. “Donald Trump did not win the election — the Democrats lost the election! That means rebuilding the Democratic Party, making it a grassroots party — a party from the bottom on up!”

Sanders spoke at the James L. Knight Center as part of a nationwide “Come Together and Fight Back” Tour largely in swing states and Republican states. Sanders spoke in Maine and Kentucky earlier this week and will later go to Texas, Nebraska, Utah, Arizona and Nevada. The goal is to rebuild the party after the major rift that developed between supporters of Sanders and Hillary Clinton, the Democratic nominee for president. About 2,000 people were in the crowd, according to a Knight Center official.

Sanders was accompanied by Democratic National Committee chair Tom Perez, a labor secretary under President Obama. Perez’s predecessor, U.S. Rep. Debbie Wasserman Schultz of Weston, had to step down from the chair position in July after WikiLeaks published thousands of emails showing that the DNC favored Clinton over Sanders, a U.S. senator from Vermont.

Perez bashed GOP leaders — with some colorful language as he dropped the “s” word multiple times: “The Republican leadership doesn’t give a s--- about people who are suffering.”