Nothing is immune from the bruising budget battle between the House and Senate in Tallahassee. 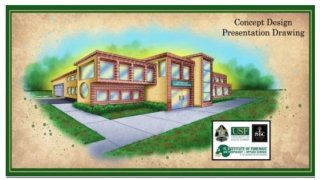 It's a first-of-its-kind Florida forensics laboratory in Land O'Lakes near the Pasco County jail (see rendering) that would teach law enforcement professionals and students while focusing on 16,000 estimated "cold case" unsolved murders and missing person cases in Florida.

"I haven't criticized the project," Latvala said. "I'm just saying that it's ironic: He's against projects, but the largest single project in the budget is for him ... It's do as I say, not as I do."

"It had nothing to do with me," Corcoran said. "It's not parochial. It's for the entire state."

The Tampa Bay Times described the project, known as a "body farm," in detail here.

It will formally be called the Florida Forensic Institute for Research, Security and Tactical Training. The leaders of the project include Pasco Sheriff Chris Nocco and forensic anthropologist Erin Kimmerle at USF, who led the research that unearthed the remains of young boys beaten to death and buried in unmarked graves at the former Arthur Dozier School for Boys in Marianna. The project is listed as a one-sentence proviso on page 181 of the House budget bill in the criminal justice category: "From the funds in Specific Appropriation 1234, $4,300,000 from nonrecurring general revenue funds is provided to the Forensic Training center (HB 3577)." The project's sponsor is Rep. Danny Burgess, R-Zephyrhills, but Corcoran said Dr. Kimmerle brought the idea to him.

If the House carries out with its planned "standard operating budget" and extends the current budget for a second fiscal year, the project would not get any state money next year.

Nocco said he met with Latvala to discuss the project on Jan. 24. "If he had any issues with it, I wish he would have said it directly to me," Nocco told the Times/Herald.

Corcoran and Nocco are allies, and Latvala noted that Corcoran, a lawyer, has a contract at the Broad & Cassel law firm to serve as legal adviser to the sheriff's office. The speaker said plans call for naming the Pasco center in memory of a Dozier victim, Thomas Varnadoe of Brooksville, who died in 1934.