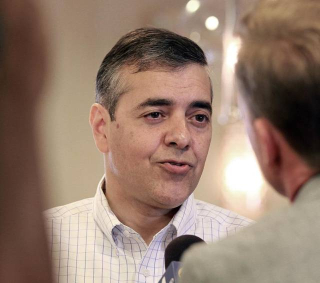 Former U.S. Rep. David Rivera appears to be testing out the digs of a state legislative office that he might seek to occupy one day soon.

Rivera, a Republican, was seen casually hanging out in the Capitol office of former Sen. Frank Artiles on Friday evening -- socializing and bantering with a handful of people who appeared to be Artiles' remaining legislative staff and others.

One of Artiles' legislative aides, Alina Garcia, used to work for Rivera when he was a state House member from 2000-2008.

Artiles, R-Miami, resigned one week ago Friday after a firestorm brought on several days earlier when Artiles insulted a fellow lawmaker and used a racial slur to describe several other senators in an alcohol-laced tirade at a private Tallahassee bar.

After Artiles' resignation, his legislative staff was kept on to provide continued constituent services until voters select his replacement in an upcoming special election, which Gov. Rick Scott has not yet scheduled.

From the hallway, Artiles' old office looks rather empty -- and the name-plate outside his door has been changed.