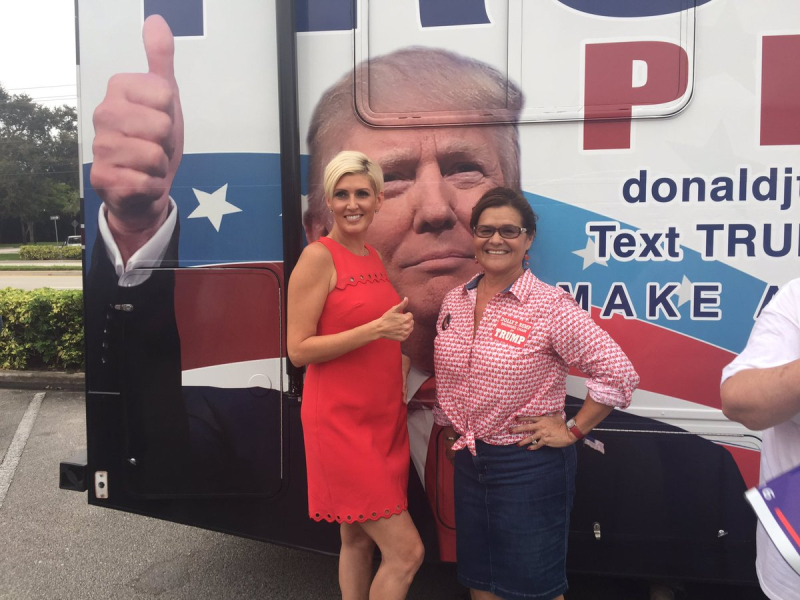 Rump resigned from the Broward Republican Executive Committee board Friday night after she was elected in December as secretary. She says that the infighting among the board has nothing to do with Trump or any politician, candidate or ideology and is simply, well, infighting among board factions. (Here are previous reports from the Sun Sentinel and browardbeat.com.)

Rump told Naked Politics she will remain active in Republican politics but not with BREC, the county's official GOP group. BREC, which only has about 250 members, is far less influential than it was many years ago.

Broward has about 257,000 registered Republicans so their vote can matter in statewide elections, but the group has suffered from spats that spill into headlines and frequent board turnover.

The biggest headlines occurred in April 2016 when BREC chair Bob Sutton  told a reporter “I think when Donald Trump debates Hillary Clinton she’s going to go down like Monica Lewinsky.” He later apologized.

Sutton couldn't be reached Monday but told the Sentinel:

Here is Rump's email she sent to BREC members Friday:

To my friends and colleagues in the Broward Republican Executive Committee,

Despite my best efforts to move BREC forward and to make good on the platform I was elected on, I have found it impossible to make progress in the current leadership environment. We do not operate as a cohesive board; there is major dysfunction, division, and disorder between officers.  In addition, our chairman has cancelled Board meetings, silencing the opinions of other elected board members.

I have not been able to adequately address structural problems and issues in an effective way due to roadblocks from our own leadership. I, along with other board members, have made sincere attempts to address major issues, namely with the botched membership list and the website confusion. Any and all attempts I have made to better BREC are met with hostility or go completely ignored.

And as most of you know, my specialty and expertise is in event coordinating. However, to date, I have not been consulted on any Lincoln Day activities whatsoever.

The BREC Treasury is at an all-time low, and instead of focusing on important things like raising money and Lincoln Day, time is spent on filing false police reports and making false and disgusting accusations against myself, my family and fellow BREC Board members. I will not continue to subject myself and my family to these continued vile attacks and slanderous accusations.

I have a deep unbending loyalty to Conservative and Republican Causes; however, it has become completely clear to me that I am surrounded by people who do not share my same goals and values.
Since I am unable to be effective on this board, I have decided to work elsewhere on the causes that I hold dear. I am going to move to other venues where I can be appreciated and respected for what I can bring to the table.

To those of you who voted for me as BREC Secretary, I will always be grateful.  However, it is with a heavy heart that I must inform you of my resignation as BREC Secretary effective immediately.

All the best and I remain as always, your friend.

Dolly T. Rump
Rump's resignation letter mentions that someone from BREC filed a "false police report" involving another member -- a reference to Richard DeNapoli, a former BREC chair. The Broward Sheriff's Office was summoned on March 8 to a GOP meeting at Lauderdale Beach but took no action, DeNapoli said. DeNapoli sent Naked Politics a copy of the BSO information document which showed that it resulted in no “written report” and that DeNapoli and a BREC member “agreed to disagree w out offending each other.”
"Cleary, this is a 'witch hunt' orchestrated to intimidate, harass and defame me, and you as BREC members need to be aware of this," DeNapoli wrote in an email to BREC members April 22.