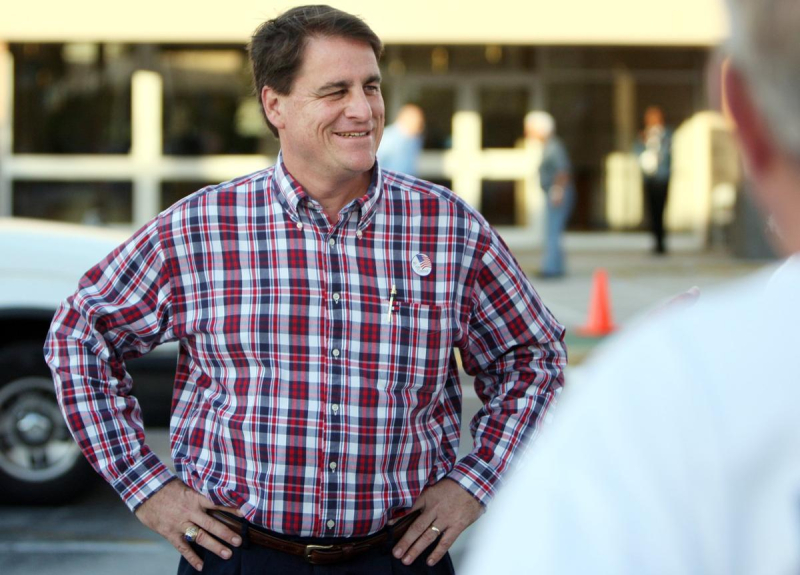 Seiler will speak Friday at the 55th annual Mayor’s Prayer Breakfast, sponsored by National Christian Foundation of South Florida at the Broward County Convention Center. One of the speakers is Jim Daly, president of Focus on the Family, a national group that has opposed gay rights, including adoption by same-sex couples. Seiler said he had nothing to do with inviting Daly.

Seiler’s relationship with the gay community could nag him on the 2018 campaign trail if the Democrat decides to run for Florida attorney general. Seiler, a lawyer who is term-limited as mayor, has sounded increasingly interested in recent months about running and told the Miami Herald in March that he will make up his mind this summer. Republican AG Pam Bondi, who engaged in a costly battle against same-sex marriage, is term limited. (See previous stories by the New Times and Sun Sentinel.)

Although the event isn’t organized by the city, it has been known for years as the “Mayor’s Prayer Breakfast.” About 1,200 are expected to attend the event, where Seiler will give a brief introduction.

Seiler told the Herald that he has never met Daly.

“I do not agree with that speaker's views as some have been explained to me,” he said. “Since I never met or communicated with the gentleman, I was not aware of his views on all these subjects, and I am sure that we don't see eye to eye on most of these subjects.”

Seiler said he has attended the breakfast for the past decade and at times in the 1980s. He has told opponents:

“As Mayor, I am an honorary host and speaker (invited by the committee and confirmed almost a year ago), and I have prayed with and spoke to this group, along with many others (including LGBT groups), for the past 8 years.  My message is, has been, and will be one of kindness, compassion, inclusion, tolerance and respect.  In the past, that message has been very well received at this Prayer Breakfast.  In fact, over the years, this Prayer Breakfast has brought our community together, united individuals of different backgrounds, unified houses of worship of different faiths, and had an incredibly positive impact on our City.  Every year, it seems that a very diverse group leaves the Prayer Breakfast motivated, excited, and energized to assist others and build community.

Daly last spoke at the event many years ago when the city was led by Mayor Jim Naugle, who drew wrath from the gay community over his comments about gay sex in park bathrooms.

Stephan Tchividjian, president of the National Christian Foundation of South Florida and grandson of Billy Graham, said he found Daly “too divisive” in the past. But his group sought Daly as a speaker after meeting him.

“He had changed some of the rhetoric and language and really made some significant overtures to say ‘let’s have some dialogue,’” he said.

Daly remains opposed to same-sex marriage, but he has called for more civil dialogue between the Christian community and the LGBT community and is expected to talk Friday about working together.

“We are very quick to judge those outside the church,” Daly told the Herald. “I get that criticism. For me it's not changing the principles. It is how do we apply a more gracious standard toward the world and more rigid standard for ourselves.”

But gay-rights activists continue to see the positions Daly avows as offensive.

“I haven’t seen anything that is actually evolution beyond softer rhetoric supporting the same bad policies,” said Nadine Smith, director of Equality Florida.

Broward has one of the more visible politically active gay communities in Florida, and local activists say they want to hear more than toned-down rhetoric from Daly.

“If he is prepared to repudiate or reverse his positions, this would be the time to do it,” said Fort Lauderdale City Commissioner Dean Trantalis, the city’s first openly gay commissioner. “He is coming to our city. This is our home. We don’t need to have messages of hate brought here.”

Focus on the Family’s website offers tips on “leaving homosexuality,” including the “right to counseling for unwanted same-sex attractions” and how parents can respond to “gender-confusing messages in schools.”

The Human Rights Campaign, a gay-rights group, calls the organization “one of the most well funded anti-LGBTQ organizations in America” and says it has funded several candidates who have opposed gay rights.

Decades ago, Seiler, a Catholic and married father of four, was seen by the gay community as ahead of the curve. He supported domestic-partner benefits for city employees while he was an elected official in Wilton Manors, one of the earliest cities to do so in Florida. But as public opinion shifted in favor of same-sex marriage, the Fort Lauderdale mayor tried to stay on the sidelines telling the Herald in 2013 that he had no position on the issue but supported civil unions and domestic partner benefits for city employees. In 2014, he voted against a city resolution in support of same-sex marriage, but when the U.S. Supreme Court upheld marriage in 2015, Seiler signed a city proclamation celebrating the decision.

Same-sex marriage has been the most prominent topic in which Seiler has struggled to find his voice in explaining his positions, and at times has expressed irritation when asked about it.

But if Seiler decides to run, he may have the Democratic field all to himself: as of Thursday, the state Division of Elections website did not list any attorney general candidates from any party.

If Seiler runs and faces no strong Democrats, his statements on same-sex marriage and participation in the breakfast likely won’t matter. But a competitive Democrat could hammer Seiler on the topic and appeal to LGBTQ residents, a reliable Democratic voting bloc.

Seiler has said in the past year that this would be the time for him to run statewide, since all four of his children are grown. However, some Democrats privately wonder if he has the fire in the belly for a statewide partisan race -- and whether he can appeal broadly to Democrats when he hasn’t been particularly active in party politics.

The theme of Friday’s breakfast: “together.”