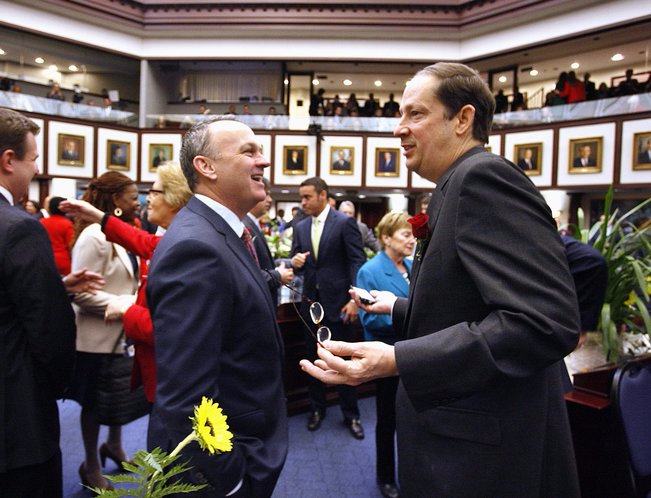 Midway through the day on Tuesday, a framework of a budget deal appeared to be emerging as House Speaker Richard Corcoran and Senate President Joe Negron leapfrogged past their budget chairs and spent much of the morning negotiating a break in the deadlock.

"I'm very encouraged,'' said Sen. Bill Galvano, R-Bradenton, at midday. "The process has continued and so there's continuing offers between the chambers and we'll take it from there."

It became clear that the negotiations were going beyond the detail of the budget allocations and instead reached into trades on major policy bills that have divided the chambers on education, environmental protection, health care and state employees.

The Senate used its Appropriations Committee Tuesday to quickly advance education reforms sought by the House as part of the budget negotiations. With eight minutes left, the Senate passed two large amendments to education bills and took no testimony.

"These issues have been discussed around here and we're just putting them in the conference posture,'' said Senate Appropriations Chair Jack Latvala, R-Clearwater, after the meeting.

However, Senate education committees have largely discussed only in general concepts how to help students in perpetually failing schools.

The chamber's response to a proposal the House has dubbed "schools of hope" was unveiled only a week ago. That specific policy language got less than an hour's worth of discussion at that previous hearing; Tuesday was the Senate's opportunity to continue that discussion. By comparison, the House spent more than eight hours specifically vetting its "schools of hope" bill before it passed the floor earlier this month.

When a member of the public addressed the Senate Appropriations Committee, noting that one of the amendments would allow non-certified teachers to be teaching at Florida schools, Latvala reminded her there was one minute left before the committee had to adjourn.

Latvala said he hasn't agreed to accept the House's reforms to pensions and state employee health benefits in exchange for the pay raise but he didn't deny that a potential trade is on the table.

"I haven't agreed to anything like that. The bill was heard in committee yesterday. It will be heard again in committee before any trade is made."

He denied they are close to allocations. "I've been sitting in that meeting for four hours. I have no idea what's going on and I've got nothing more to say right now,'' he said.

Galvano said the Senate is not ready to trade gaming policy for budget consensus.

"At this point they are only being put into the conference process,'' he said, adding that he was "not privy to the latest details. We still need to have the membership vote on these things."

He said that relying on a gambling deal for reserves for future years is not part of the deal at this point.

"You can't do that because we have to have at least some affirmation from the Seminole Tribe that these funds are available,'' he said. "Right now, it's just at the allocation stage and you can't allocate dollars you don't have."

"We will have other meetings in this committee,'' Latvala said, apologizing that they didn't get through some of the bills and cut short much of the debate.

For the Senate, major elements of an agreement include a major new Lake Okeechobee reservoir, more money for the state's major universities and an across-the-board pay raise for state workers.

The House's must-haves include $200 million for an expansion of charter schools, no increase in property taxes for public schools and a statewide referendum in 2018 to let voters increase the Florida homestead exemption from $50,000 to $75,000.

Negotiations intensified while Gov. Rick Scott was in the second day of a four-day Enterprise Florida trade mission to Argentina. But as the negotiations over major policy appeared to move underground, advocates also expressed their frustration.

"If the House had wanted to promote policy changes that said we will not fund much without non-recurring revenue, we should have reviewed it, had public input,'' said Karen Woodall, lobbyist for the left-leaning Florida Center for Fiscal and Economic Policy. "Instead, the House is using the budget as a tool to for the Senate's hand on philosophical policy differences."