The House will follow the Senate Thursday in passing a spending plan to start budget negotiations, but partisan divisions are deepening as House Democrats voice resentment over Republican tax cuts, a big boost for charter schools, a performance-pay study for judges and the elimination of unfilled state jobs. 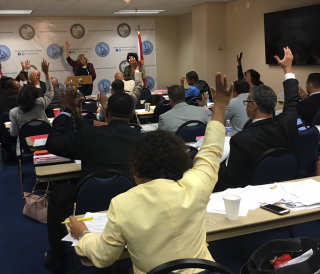 In a show of bipartisan unity, the Republican Senate passed its budget 39-0 Wednesday. But the 41 House Democrats are poised to take a stand and oppose Speaker Richard Corcoran's "schools of hope" plan to give $200 million to out-of-state companies to build charter schools near failing D- and F-rated public schools, many of which are in South Florida and Tampa Bay.

A lot of House Democrats (left) are from urban districts where some of those struggling schools are located, and they groaned loudly when a staffer quoted the term "schools of hope." After signaling their intent to oppose the idea, they pelted a leading charter schools advocate, Rep. Chris Latvala, R-Clearwater, with questions for nearly two hours on the House floor.

"What harm is it to try something new?" Latvala asked skeptical Democrats, who view charter school expansion as a corporate giveaway with too little accountability for charters' performance.

The rhetoric in the Democratic caucus room offered hints of upcoming races for governor and U.S. Senate and the debate over the future of public education in Florida. "This is a gigantic issue," Rep. Janet Cruz, D-Tampa, the House Democratic leader. "This is a fight for all of us who believe in public schools."

Democrats will oppose the "schools of hope" policy language in Latvala's HB 5105, but it remains to be seen how many will also vote against a Republican budget that includes hometown projects for a number of Democratic lawmakers. Voting no on a budget, while taking credit for hometown pork, has long been viewed as a crass political move in Tallahassee.

On the House floor, Democrats offered a single budget amendment Wednesday to study the cost of capital punishment. The amendment by Rep. Sharon Pritchett, D-Miami Gardens, failed on a vote of 71 to 42.

Senators, meanwhile, are open to some form of a $200 million charter school expansion, which is a Corcoran priority and a linchpin to finishing a budget in time for a May 5 adjournment. Senater leaders agreed Wednesday to include charter school legislation in upcoming budget talks, making it a bargaining chip for one of Senate President Joe Negron's priorities.