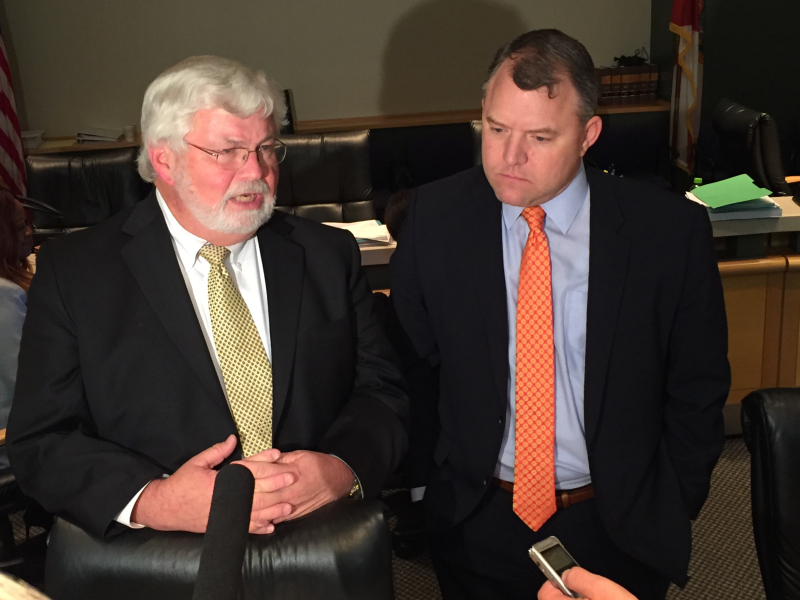 After brokering and winning preliminary approval for a delicately-crafted compromise to alleviate the need to discharge polluted water from Lake Okeechobee, Sen. Jack Latvala on Wednesday directed his fire on sugar interests and the House.

Although the sugar industry has not stated its direct objections, "they're not 100 percent on this," Latvala, R-Clearwater, told reporters Wednesday after the Senate Appropriations Committee approved the compromise language in SB 10.

"It's like Waca-mole,'' he told reporters. "It's a new issue every day, a new complaint, a new defense every day. They just really don't want to do anything differently."

The plan to alleviate the need to discharge polluted water from Lake Okeechobee by storing and treating more water to flow into the Florida Everglades and, ultimately to Florida Bay, won bi-partisan approval and drew three no votes. So will sugar mount the opposition to this in the House, Latvala was asked.

"We've got a House speaker who has made a big deal out of crushing special interests, reducing the influence of special interests in this process here,'' Latvala answered. "Now we have a chance to deliver on his promises."

U.S. Sugar officials have complained that the deadlines in the bill interfere with the schedule already set up between the state and the U.S. Army Corps of Engineers for Everglades restoration projects but Sen. Rob Bradley, R-Fleming Island, the author of the bill, said the Integrated Delivery Schedule is flexible.

That "is yet another excuse to not move forward with something that everyone agrees has to happen, which is additional storage," he said Wednesday.

He said the Corps and others have testified that the IDS "is not something that came from the mountaintop with Moses, on stone, it is a flexible document that is a reflection of political and financial realities, not just science.

"What the state is saying, what the Senate is saying, is we now have the financial and political will to get this done. The schedule should adopt to this reality and that is the new reality."

Here's what the bill does, according to the Senate press release:

“I am very grateful for the input from my colleagues, constituents and fellow citizens across Florida as we work to advance this critical piece of legislation,” said Senate President Joe Negron (R-Stuart).  “After twenty years of talking about southern storage, the time to act is now. This legislation will make an important difference to families, communities, and the economy east and west of the Lake, as well as southern communities who have waited too long for investments in meaningful economic development to expand workforce training and job opportunities.”

“Our goal was to explore all available options to deliver this much-needed and long-anticipated storage south of Lake Okeechobee,” said Senator Bradley. “The legislation now advancing to the Senate floor provides a solution to the plague of harmful, polluted discharges and toxic blue-green algae that respects the interests of the agricultural community and the rights of private land owners, while achieving our goal to dramatically increase southern storage.”

o   Directs the SFWMD to negotiate modifications of lease terms on state and district owned lands to make land available for the reservoir project.

o   Directs SFWMD to negotiate for the acquisition of privately owned property if needed for the reservoir project through purchase or land swap.

o   The bill terminates the current PRIDE work programs on state owned land using inmate labor for agricultural work in light of the high unemployment rate in the EAA for these types of jobs. This land would then be available to swap for any privately owned land needed for the reservoir project further minimizing any impact on agricultural workers in the EAA.

Record rainfall this past year resulted in unseasonably high water levels in Lake Okeechobee, which threatened the integrity of the Herbert Hoover Dike. To maintain safe water levels, the Army Corps of Engineers authorized the release of billions of gallons of water from the Lake to the St. Lucie and Caloosahatchee Rivers. Such freshwater discharges cause significant environmental damage by lowering the salinity levels of the estuaries and introducing pollutants into coastal waters. Due to the discharges this summer, massive amounts of toxic algae that originated in Lake Okeechobee were sent to the estuaries and coastal waterways.

As a result of the high volume discharges, coastal communities experienced enormous harmful algal blooms with devastating impacts not only to the ecology of local waterways, but also to residents, fishermen, and local businesses. The extent and severity of the blooms resulted in Governor Scott declaring a state of emergency in four Florida counties.