Stalemate in Tallahassee as budget talks collapse and stall

Negotiations between the Florida House and Senate on a state budget are at a stalemate after the House on Sunday proposed a "continuation budget" for the fiscal year that begins July 1, meaning that current spending levels would remain flat with no cuts, no new initiatives and no hometown projects for legislators.

House Speaker Richard Corcoran, R-Land O'Lakes, made his offer in response to what he said was a liberal, free-spending Senate obsessed with higher spending and a lack of respect for the House. Corcoran viewed that as a serious offer, in part because it would ensure current spending levels for Enterprise Florida and Visit Florida for another 12 months. 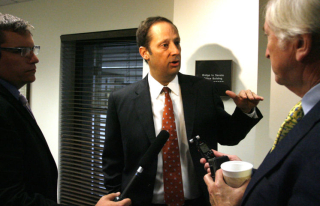 "That's not an offer. That's the equivalent of packing your suitcase and moving out," Negron told the Times/Herald. "It's a reflexive and lazy response to our responsibility for budgeting."

Corcoran referred to Negron and Latvala as "Nancy Pelosi and Bernie Sanders" for their approach to budgeting, and Latvala in particular bristled at being labeled a liberal Democrat by the Republican speaker.

"If we're being liberal wanting to restore the personal needs allowance that people on Medicaid get, then so be it," Latvala said, referring to a proposed House cut, from $105 a month to $70, for elderly Floridians to pay for haircuts and other personal needs.

At the end of last week, Negron and Corcoran said negotiations were proceeding smoothly, and both leaders sounded hopeful about striking a deal. But House leaders claimed senators opened up a series of new issues on Saturday, including money for farmworkers and a program to help firefighters who are presumed to have contracted cancer. The House also said senators insisted the budget must have seven dollars for Senate member projects to every dollar for House projects.

Legislative leaders have said that a joint House-Senate conference committee would have to begin its work by Monday for the session to end on time on Friday, May 5.