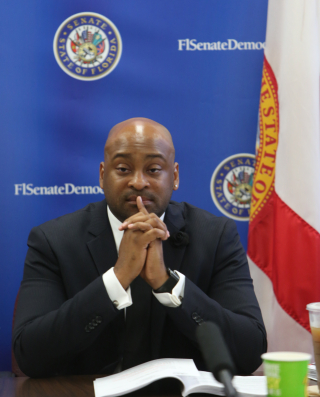 When Republican and Democratic senators a week ago faced a deadline but were still grappling with how to reach middle ground on proposed testing reforms for K-12 public schools, they hashed out their differences -- quite literally, in some cases -- in backroom meetings out of the public's eye.

While the Senate was in open daily floor sessions last week, six key senators were party to small-group discussions among themselves, both on the floor and at times in a separate room at the back of the Senate chamber.

When confined in that backroom, no member of the public could have observed or overheard what the senators discussed in their one-on-one or small group chats even as the chamber was in open session. The conversations and negotiating that took place in those hours helped yield a 72-page rewrite to a House education bill (HB 549), which senators later approved unanimously on Thursday.

Senate Democratic Leader Oscar Braynon, of Miami Gardens, revealed the existence of the small group negotiations while speaking with his caucus at a public breakfast Monday, the final day of the 2017 session.

While discussing a 278-page K-12 budget bill (HB 7069) House Republicans had produced late Friday -- which incorporated most of, but not all, of the testing bill the Senate passed and myriad other policies -- Braynon complained that input provided by Democrats wasn't reflected in the final product.

"A lot of those things got combined into one education bill, and many things got left off -- and they got left off because people like Senator [Darryl] Rouson, Senator [Bill] Montford, Senator [Gary] Farmer were in a room negotiating with Senator [David] Simmons, Senator [Kelli] Stargel, Senator [Anitere] Flores to make sure that we produced a product that we, as an entire Senate, agreed what was to happen in Florida. Not just what one side wants," Braynon said.

Rouson of St. Petersburg, Montford of Tallahassee and Farmer of Lighthouse Point are Democrats. Simmons of Altamonte Springs, Stargel of Lakeland and Flores of Miami are Republicans.

Farmer told the Herald/Times after Monday's Democratic caucus that the meeting Braynon spoke of had taken place in a Senate floor conference room  -- known as "the bubble" -- during a daily floor session last week.  (The testing bill was supposed to be taken up in the floor May 3 but was delayed amid vehement concerns by Montford and others. The rewrite was filed under Flores' and Stargel's names later that night.)

Simmons emphatically said Wednesday afternoon that no single meeting occurred that involved all six senators at once. For instance, Simmons said he met mostly with staff in "the bubble" last week. In regards to the testing bill, he said he spoke only with Flores and Stargel and that that discussion was limited to whether their rewrite would be included in the House's larger budget bill, which at the time Simmons didn't yet know.

Braynon also clarified Wednesday that the meeting that he spoke of Monday was actually in reference to a series of meetings that at one point or another involved each of those six senators. He said those senators worked over several weeks, since the last committee hearing on the testing bill, to come to the bipartisan compromise they reached last week.

The Constitution allows only two lawmakers to meet privately if they're deciding on "formal legislative action" or "pending legislation or amendments." But any "prearranged" meetings of more than two lawmakers discussing such topics have to be noticed in advance and open to the public.

The senators' gatherings in "the bubble" present a grey area to those Sunshine requirements.

"This is the problem [with] the constitutional provision ... and the ease by which the right of access can be negated — it applies only to 'pre-arranged' gatherings," First Amendment Foundation President Barbara Petersen said by email.

She questioned why a group of senators would be negotiating "these important and substantive issues" in a room like "the bubble." "The public should know that major policy decisions are being made [without] any public oversight or input," she said.

At the caucus breakfast Monday, Braynon vented frustration that Democratic senators had "negotiated in good faith" with the Republican senators -- only for their combined work to be disregarded and distorted through House Republicans' unexpected compilation of various policies in HB 7069.

Simmons, the Republican chairman of the Senate's pre-K-12 budget committee, said on the floor Monday he wasn't given a draft until Thursday evening -- less than 24 hours before the rewrite of HB 7069 was made public. Lawmakers narrowly passed the bill before ending their annual session on Monday, although some expect -- and want --- Republican Gov. Rick Scott to issue a veto.

*This post has been updated to include Simmons' and Braynon's additional comments Wednesday and to correct that that Braynon was not referring to any one single meeting the six senators had altogether, but that they'd met together in smaller groups at various points over an extended period of time.