Unresolved spending decisions on a new $83 billion state budget were "bumped" Sunday to Senate President Joe Negron and House Speaker Richard Corcoran, who have until Tuesday to agree on everything if the session is to end on time Friday.

"It's volatile," Corcoran (in photo) said as he monitored the talks from the speaker's office in the Capitol on Sunday. 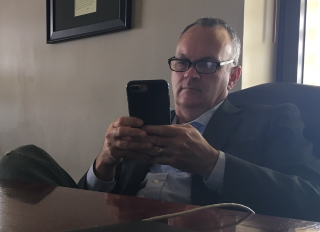 college and university projects, $40 million for 69 local water projects and some proviso language that gives direct policy guidance to state agencies. But other issues were handed off to the two leaders, including most environmental spending, education and health care policy.

Among the many issues to be hashed out in private is the amount of a monthly special needs allowance for Medicaid patients, including veterans, who live in nursing homes and group homes. The House wants to reduce the allowance from $105 a month to $70, but the Senate opposes that change.

The House backed away Sunday from a proposal to eliminate 45 of 276 jobs in Gov. Rick Scott's office, including the position of Christine Diaz, who works for the state on federal issues with the state congressional delegation in Washington. Latvala said the Senate had no interest in that.

Nor has the Senate signed off on Corcoran's insistence that the state auditor general review the first phase of a massive expansion project at Tampa International Airport. Trujillo said the Senate didn't accept a House request that all state agencies file quarterly reports with the Legislature on all employee travel.

As the session's last week begins, the House won't be in session as Corcoran waits for the Senate to vote Monday on another of his priorities: a proposed $25,000 increase in the Florida homestead exemption to go before voters in the November 2018 general election.

Some major budget-related bills are on the Senate Appropriations Committee's agenda Monday, including a package of modest tax cuts (HB 7109) and SB 7030, which includes a Senate priority of a state employee pay increase, coupled with pension and health insurance changes the House wants. They are in a stand-alone bill separate from the budget, which may make it harder for Democrats to vote no and less likely that the governor would veto a pay raise he might not support.

"We're putting it all in one place, so it either all moves along or it all goes down the tubes," Latvala told reporters.

The Senate has a five-hour floor session scheduled for 1 p.m.