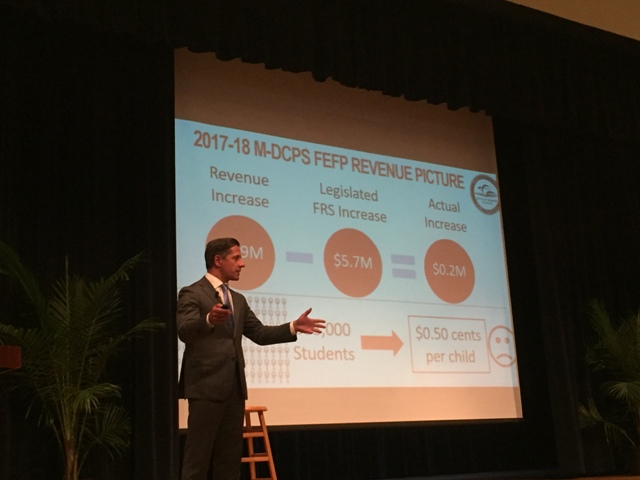 "This is a man-made crisis," Carvalho said, speaking to a packed auditorium at John A. Ferguson Senior High in West Kendall. "If something doesn't change, a crisis it will be."

The town hall at Ferguson High was the third of six meetings organized by the school district this week to urge teachers and parents to contact the governor and ask him to veto a mammoth education bill (HB 7069) and the line-item in the budget for per-pupil education spending.

The $82.4 billion budget passed by the Florida Legislature earlier this month increases school funding by 0.34 percent or $24.49 per student, which Carvalho and other Florida superintendents say is not enough to meet public education needs. At the town hall meeting, Carvalho told residents that after the district's mandatory contribution to the Florida retirement system, the increase amounts to just 50 cents for each of the district's nearly 350,000 students.

"What can you get for 50 cents these days? Can anybody tell me, please?" Carvalho asked the audience at Ferguson High.

The Miami-Dade school district is also concerned that a provision in HB 7069 — which would compel districts to share millions of dollars in local tax revenue earmarked for capital projects with charter schools — would force Miami-Dade to put maintenance projects on hold and impact the district's credit rating, Carvalho said.

Many in the audience said they shared the school district's concerns and planned to contact the governor. Maria Prospero, the mother of a student at Olympia Heights Elementary School, said she had decided to attend the town hall meeting "for my daughter's rights." Prospero said she was concerned that her daughter's school could lose after-school activities and language programs if the district doesn't get enough state funding. She said she planned to share information about the budget with her friends on Facebook and send an e-mail to Scott.

Meanwhile, supporters of the education bill are organizing their own events to urge the governor to sign HB 7069 into law. They have planned three rallies this week at the same locations as the school district's town hall meetings. A pro-HB 7069 rally will be held at Miami Senior High School on Thursday at 5 p.m. before the school district's 6 p.m. town hall meeting. Supporters of the bill are also holding a rally on Friday at 3 p.m. outside the School Board Administration Building downtown. A school district sponsored town hall will be held at that location at 4 p.m.