Does Daisy Baez live in the Florida House district she represents? 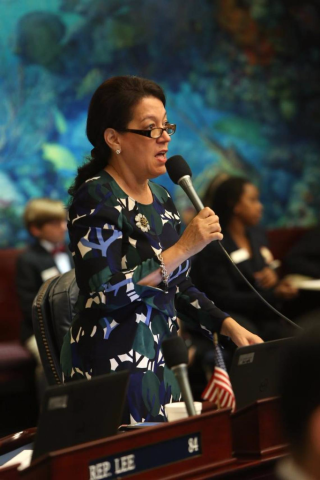 State Rep. Daisy Baez doesn’t appear to live in the House district she represents, a possible violation of the Florida Constitution that could haunt her Florida Senate candidacy.

Her residence continues to be a prim Coral Gables house with a stack of her old campaign yard signs leaning against one of the porch walls. On Monday evening, Baez wasn’t inside — but her two rescue dogs, Oso and Coco, were. So was her campaign team, working around the kitchen table. Baez was expected back a couple of hours later.

The home is in House District 112. Baez, a Democrat, represents House District 114, whose boundaries begin about half a mile away. Florida requires lawmakers to live and vote in the districts they represent by Election Day. For Baez, a freshman, that was Nov. 8 of last year.

“I have two residences,” Baez told the Miami Herald in a telephone interview Tuesday.

Baez said she rents an apartment on Anderson Road, about a mile and a half away from her three-bedroom, two-bathroom house on Malaga Avenue where she claimed a homestead exemption on her 2016 property taxes, according to county records. Asked if the apartment was vacant or occupied, Baez cleared her throat several times, sounded uncomfortable and wouldn’t respond.

“I have kept this home, and I have a rental,” she said. “I am renovating this house to put it on the market.”

Baez then ended the interview, saying she needed to consult with her campaign team before speaking further.