Gov. Rick Scott: I have the option of vetoing the entire budget 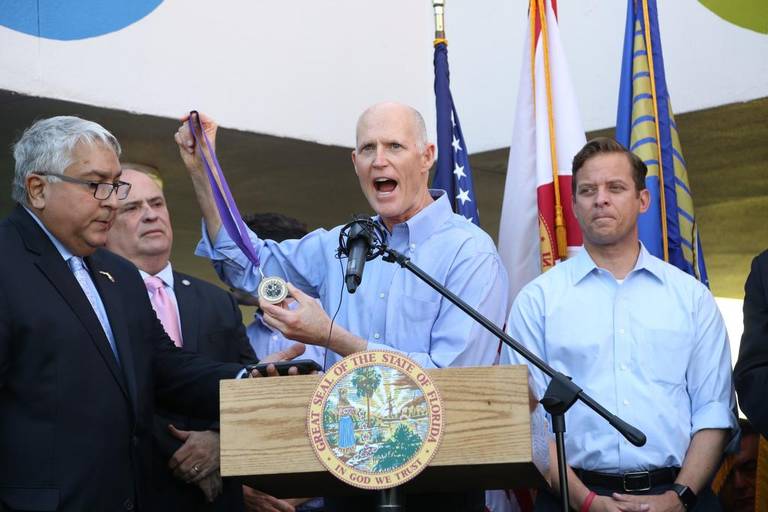 It comes as no shock that Gov. Rick Scott is unhappy with the state budget the Florida Legislature passed late last night.

Scott put out a three paragraph earlier today slamming the Legislature for cutting Enterprise Florida, reducing Visit Florida funding and hammering out the final details of the budget mostly in secret. Since January, Scott has taken to television ads, rallies around the state and face-to-face meetings with lawmakers warning them not to cut Enterprise Florida and Visit Florida - two agencies he credits with helping the state add more than 1.3 million private sector jobs since he was elected. In his statement to reporters today, Scott acknowledges he has the authority to veto the entire state budget, something that has not been done by a governor since 1992 when then-Gov. Lawton Chiles vetoed the budget.

"I am beginning to review the budget and I have the option of vetoing the entire budget or vetoing the items that circumvented the transparent process and do not have an acceptable return on investment for hardworking taxpayers," Scott said. "Just like I do every year, I will make my decisions based on what’s best for our families because my job is to wake up every day and fight for Floridians.”

"Once again, the Florida Legislature has turned their back on Florida’s ability to fund economic incentive deals that help our state outcompete our top competitors for important jobs," Scott said. "This is very concerning to me and is an action that each member will have to defend as their local communities lose out on new manufacturing facilities, headquarter relocations and thousands of high wage jobs for families."

He also made clear once again he opposes the House-led effort to cut Visit Florida, the state's tourism marketing agency that came under fire for striking secret contracts with celebrities like Miami music star Pitbull to promote the state.

“Furthermore, the legislature’s decision to cut tourism marketing could lead to a drastic reduction in visitor spending to our local businesses and revenue to our state," Scott said.