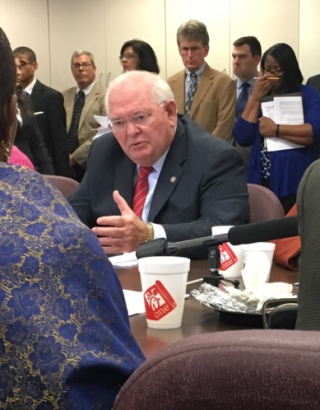 Hostility erupted Monday at a midday meeting of the 15-member Senate Democratic Caucus over a pivotal and controversial vote to ask Florida voters to increase the homestead exemption by $25,000 -- to $75,000.

With the Senate poised to vote later Monday, Democrats did not take a caucus position to oppose a proposal that cities and counties say would force them to increase taxes and fees on poor people, including renters, and small businesses.

The Senate needs 24 votes to pass the proposal, and there are 23 Republicans, with one seat vacant and one senator absent. So if the Democrats remained united, they could defeat the tax break and hand Republicans a huge political defeat.

But Democrats aren't united. Democratic Leader Oscar Braynon, D-Miami Gardens, said there was no point in seeking a caucus position when some Democrats are poised to vote for it (Democrats Lauren Book of Plantation and Bill Montford voted yes in the Rules Committee last week).

Sen. Jeff Clemens, D-Lake Worth, assailed Republicans for targeting poor people. "This hurts poor people. You can deny it if you want," Clemens said.

That prompted a sharp rebuttal from Montford, who represents some of the smallest and poorest counties in the state (which are largely shielded from the loss in property tax revenue under a higher homestead exemption).

"If we really believe that Republicans are that sinister," Montford said, then Democrats need to demand a special session on the issue later this summer. "Those are serious, serious accusations," Montford said.

Another clash erupted between Sen. Darryl Rouson, D-St. Petersburg, and Sen. Gary Farmer, D-Lighthouse Point. Rouson was upset at Farmer's comment that "ordinary people" may not fully grasp the fiscal impact of voting themselves a property tax break.

"What I can't get past is the comment that the voters can't be trusted," Rouson said.