« Rick Scott's chief of staff, Kim McDougal, to 'transition' out of office | Main | Two Republicans say no to running for Ros-Lehtinen's seat » 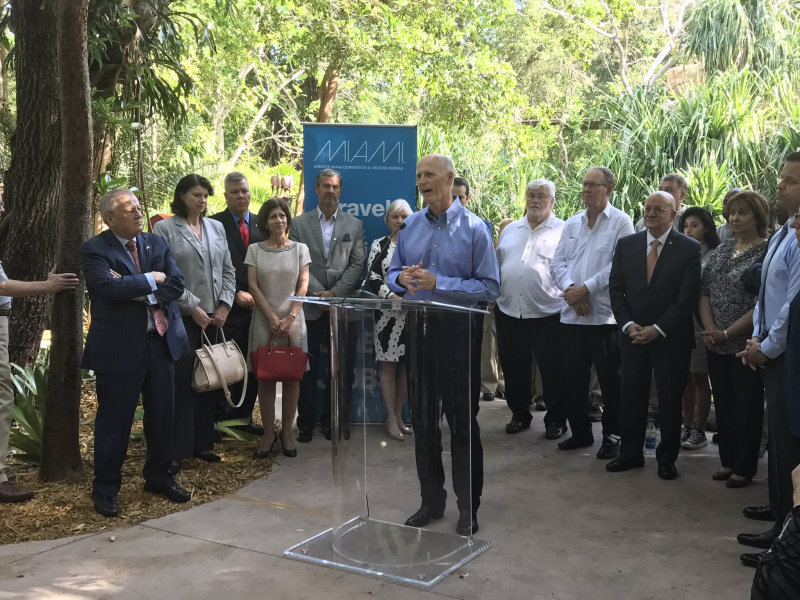 Florida Gov. Rick Scott on Monday renewed his threat to veto the state Legislature’s budget, disappointed in lawmakers for rejecting his funding wishes.

“I’ve got a lot of options,” Scott said during an appearance at Miami’s Jungle Island. “I can veto the whole budget. I can veto a portion of the budget, a line of the budget. And I can do a special session. So I’m looking at all those options.”

Although Scott himself remained noncommittal about his plans, the joint appearance with Florida Sen. Jack Latvala — who called for a special session to meet Scott’s demands — may provide an indication as to Scott’s mindset.

Latvala, the Senate budget chief, backed Scott’s proposed funding for Visit Florida and slammed lawmakers who did not seek to include the funding in the budget.

“Wasn’t my call or we’d still be sitting in Tallahassee today,” said Latvala, a Clearwater Republican.

Latvala — whom Scott called “a strong supporter” of tourism and economic development — said he looked forward to returning to Tallahassee for a special session if Scott vetoed the budget. When asked if he would call a special session, Scott maintained he is considering all of his options.

“I’m hopeful that the governor will exercise his prerogative, will call us back to Tallahassee, will make us do the right thing for economic development in Florida and for education in Florida,” Latvala said.

Scott hosted the press conference to announce that Florida saw 31.1 million visitors in the first quarter of 2017, a new quarterly record for the state, while also criticizing the Legislature for slashing Visit Florida’s ad budget by two-thirds to $25 million.

“One out of every six jobs in our state is tied to tourism, and unfortunately this year our Florida Legislature has been very short-sighted,” he said.

Latvala praised Scott for his commitment to tourism and the state’s economic development, while House members for calling for funding cuts to Visit Florida.

“I’ve spent my life in the business world and owning my own business, and I know when you stop advertising, when you stop marketing, you start dying,” he said. “I’m hopeful that we won’t have to experience that with our tourism industry in Florida. I’m hopeful that the governor will call us back to Tallahassee and make us finish the job.”

Following the press conference, Scott responded to a report in the Naples Daily News that uncovered Visit Florida’s hiring of a German company in March to market Florida to travelers from Syria, calling it a “clerical error.”

He also fielded a question about whether he supports a permanent ban on drilling for oil near Florida’s coast, and U.S. Sen. Marco Rubio’s proposal for Florida to share in the revenue of drilling in the Gulf of Mexico while extending a ban on drilling within at least 125 miles off the coast until 2027.

“I have not seen that proposal,” Scott said of Rubio’s plan. “What’s important to me is that we keep this environment pristine.”
Pressed on whether he would support a permanent ban, he added, “if somebody has an idea...I’d like to see how you’re gonna do it and keep everything pristine.”