« Curbelo alluded to impeachment. His critics took to Facebook. | Main | Gov. Scott on schools bill: 'If people want to get involved, get involved' » 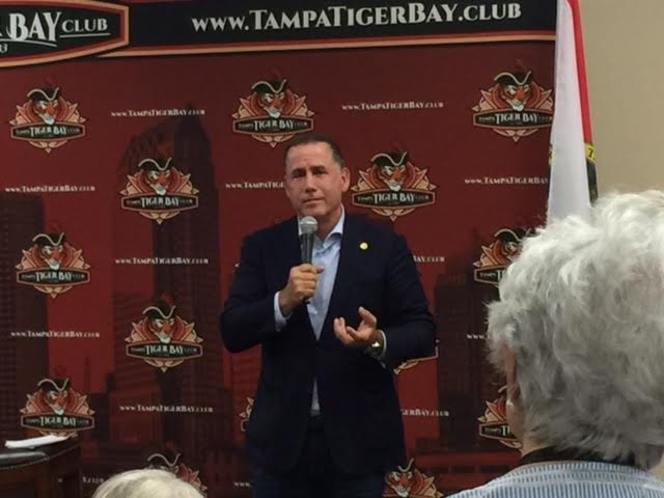 Maybe multimillionaire Miami Beach businessman Philip Levine was just trying to be provocative, earn a little extra attention as he mulls a run for governor. Maybe he was just spitballing an unlikely idea before the Tampa Tiger Bay luncheon Friday. But the Miami Beach Mayor and close friend of Bill Clinton said he is keeping the door wide open to running for governor as an independent candidate.

"There's one assumption that you made there - that somehow if I ran for governor I would be a Democratic governor," Levine, a Democrat, responded when asked how he would work with a GOP-dominated Legislature. "Too much is about Democrat and Republican. It needs to be about the people. ... Maybe possibly it's time we do something different."

Levine has been one of the biggest Democratic fundraisers and donors in the state, but he describes himself as a "radical centrist" and noted that successful mayors usually don't govern based on partisanship but on getting things done.

"I'm a Democrat right now, and I hope that I stay in the Democratic Party. I love the Democratic Party. But you know what's interesting? I actually like the Republican Party, and I like a lot of Republican ideas, and I like a lot of the people in the Republican party as well. I think that's where we need to go as a country - and start in a state like Florida and make that decision that we're going to change and do it the right way," said Levine, 55, who is worth at least $100 million earned largely as a cruise industry concessionaire.

He has invested $2 million in a political committee to fund his exploration into a possible run for governor, but said he has not made up his mind yet and is in no rush. Other Democrats actively campaigning are Tallahassee Mayor Andrew Gillum, former U.S. Rep. Gwen Graham of Tallahassee and Winter Park businessman Chris King.

The best experience for governing, Levine told the Tampa crowd, is no experience governing. Both parties claim to be the parties of working people and job creation but too often field candidates who have never created jobs or barely worked in the private sector. It was a clear dig at Gillum, Graham, and Republican candidate Adam Putnam, the agriculture commissioner.

His top priority would be improving Florida's economy, and he derided Gov. Rick Scott's emphasis on big tax breaks to lure corporations.

What will bring top-tier companies to Florida is creating "a culture and an ecosystem where they want to relocate, where their workers want to be around. It means unbelievable infrastructure, it means connecting our cities, it means making sure you have fresh water. ... NASA to us is our Silicon Valley and it hasn't been exploited to the level it really can be," Levine said.

"We should have innovation zones. Our universities must be the best. You make a decision -- do you want to invest in the state or do you want to cut everyone's taxes?. You can cut everyone's taxes, that's a great short-term solution and people will vote for you. ... I travel all over the world, all over the country. I have never had anyone say to me, 'We were thinking of coming to Florida, but it's a high tax state.' I've heard them say that your schools aren't as good as they could be."

Pressed after the luncheon if he is seriously considering running without party affiliation or considering even running as a Republican (a senior campaign adviser is Republican Adam Goodman of St. Petersburg), Levine said he has not decided.

Running as nonpartisan candidate would present enormous challenges, considering that more than 73 percent of the state is a registered Democrat or Republican and unaffiliated voters tend to be the most unreliable voters to turn out. The last major statewide candidate to run without party affiliation, former Republican Gov. Charlie Crist, received less than 30 percent of the vote in 2010 running for U.S. Senate against Republican Marco Rubio and Democrat Kendrick Meek.