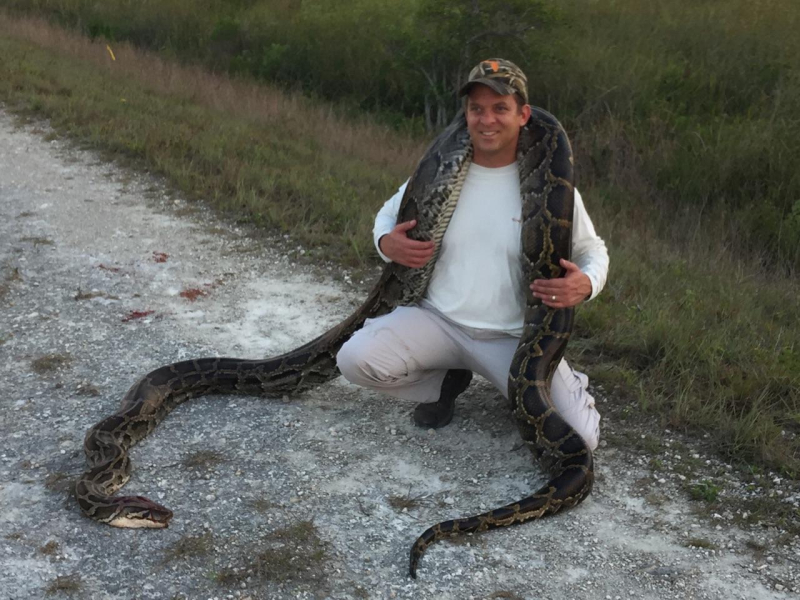 A ride-along with Florida python hunters paid off for Lt. Gov. Carlos Lopez-Cantera on Monday when the team bagged a 15-foot, four-inch female snake Monday night.

The group, headed by Swamp Ape Tom Rahill, snagged the snake about 8:30 p.m. in western Miami-Dade County along the L-30 canal, said Randy Smith, a spokesman for the South Florida Water Management District. The district is near the end of a two-month pilot program to test the efficiency of paying 25 hunters to trap the invasive snakes. As of Tuesday morning, the tally stood at 99, Smith said. Rahill, who also traps snakes in Everglades National Park for the park service, has caught four.

On Tuesday Lopez-Cantera, Florida's only lieutenant-governor to roll without a security detail, posted trophy pictures to his Twitter account.

The program ends June 1 and pays hunters $8.10 per hour, plus a by-the-foot rate of $50 for a four-foot snake and $25 for each additional foot. So far, the district has estimated the cost of the hunt at about $400 per snake, making it one of the more cost effective measures - although not a solution - to battling the out-of-control snakes.