Rubio offers another cautious reaction to another Trump controversy 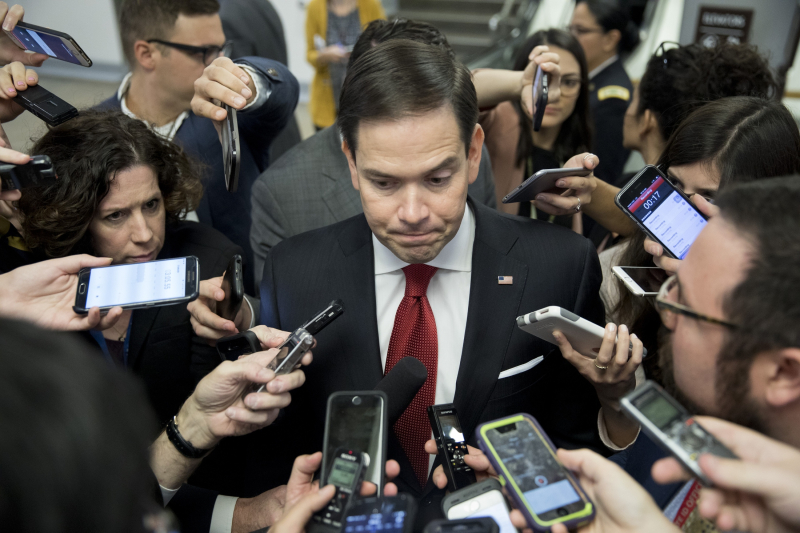 WASHINGTON - Marco Rubio the candidate repeatedly pledged to challenge Donald Trump but as another controversy swirls in Washington, Rubio is again taking a cautious path.

Rubio declined last night to comment on the news Trump gave highly classified information to Russians visiting the White House. He said little Tuesday morning. "I have very specific questions and hope they will be answered at some point today," Rubio told a CNN reporter.

That response may be prudent for a figure who sits on the Intelligence Committee, but it also fits a pattern of how Rubio has chosen to deal with Trump -- an approach that clashes with his campaign vows. “The prospect of a Trump presidency is also worrisome to me in many ways," Rubio said in announcing he'd seek another Senate term. He said he would “encourage (Trump) in the right direction, but if it’s necessary, stand up to him.”

The Senate, Rubio noted, can serve as a "check and balance on the excesses of the president.”

When Trump sacked FBI Director James Comey, Rubio was also slow to respond and then provided a measured response that said it was within Trump's authority, even as Rubio found no fault with Comey.

But his overall reluctance to challenge the administration is drawing increasing attention.

Dear @marcorubio, 2 wks until hurricane season. This FL voter would appreciate u laser focus on Cat 5 storm in DC. Signed, Your Constitutent https://t.co/NNQgkFZ3NP

Last summer, when the FBI disclosed it was investigating Hillary Clinton's use of a private email server, Rubio said:

“The FBI concluded what many Americans have known for quite some time, which is that Hillary Clinton’s conduct as Secretary of State and her mishandling of classified information was disgraceful and unbecoming of someone who aspires to the presidency. There is simply no excuse for Hillary Clinton's decision to set up a home-cooked email system which left sensitive and classified national security information vulnerable to theft and exploitation by America’s enemies. Her actions were grossly negligent, damaged national security and put lives at risk. Hillary Clinton's actions have sent the worst message to the millions of hard-working federal employees who hold security clearances and are expected to go to great lengths to secure sensitive government information and abide by the rules. They don't take their oaths lightly, and we shouldn't expect any less of their leaders."