Senate Approps chairman on massive budget bill: 'We won't do this again under my watch' 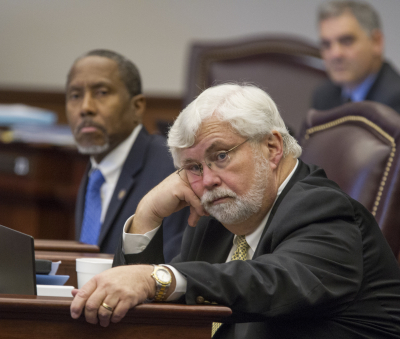 As the Florida Senate convened Monday afternoon for its final day of session to pass a 2017-18 budget package, the chamber's Appropriations chairman began by addressing head-on the controversy surrounding mammoth policy bills tied to next year's spending -- particularly a K-12 public schools proposal (HB 7069) that many parents, teachers and superintendents want rejected.

Sen. Jack Latvala, R-Clearwater, took responsibility for allowing HB 7069 to balloon so much. It clocks in at 278 pages.

"If there's fault to be had with one of these bills that has gotten a little bit out of control, just understand that we won't do this again under my watch on this [Appropriations] committee -- I promise you," he said.

Nonetheless, Latvala urged senators to consider approving the bill and let Republican Gov. Rick Scott decide later whether to veto it -- almost foreshadowing that such a veto was probable.

Latvala said if HB 7069 failed to pass Monday, it would send the Legislature into special session. "That package of bills is an entirety," Latvala said, referencing the main budget act (SB 2500) and the numerous policy "conforming" bills linked to it, of which HB 7069 is just one.

"If we don't proceed to adopt all of those bills, then we basically have nothing," he said. "Then we come back and we redo our jobs."

"If we pass a bill today and that bill, when the light of day is more fully shown on it -- the governor has the right and the responsibility to look at that bill and make individual decisions about what he allows to become law," Latvala said. "In this case, in my opinion -- my personal choice is going to be to let him do that ... We'll pass it down an let him do his job."

Latvala told the Herald/Times on Friday night the decision to allow so much K-12 schools policy to be lumped in a single conforming bill was a condition of House Speaker Richard Corcoran, R-Land O'Lakes, before the Legislature could even begin the formal budget conference in late April.

On Monday, Latvala told the chamber that although the Legislature "tried to clean up" the process of excessive conforming bills in the past six years, the House and Senate last month mutually agreed to put the House's K-12 bill in budget talks along with the Senate's higher ed bill.

"Perhaps they [the House] got a little carried away with their bill and perhaps it went a little further than a bill should've gone in the conforming bill process based on the rules of the Senate, based on our policies and certainly, based on my preference," Latvala said. "For that, I will take the responsibility."

"In trying to respect the two-house system that is so important to governing our state ... I proceeded on the basis of it being a win-win for both houses when we got into the issues in the budget and we try to accommodate our partners in the house," Latvala said. "Perhaps in some cases, that accommodation gets abused, and for that, I apologize."

Latvala urged the Senate not to throw out the "lot of good" in the budget, such as funding for Everglades restoration and water storage. "We cannot get bogged down just worrying about one issue and forget all of the many accomplishments that we've had together this year," he said. "As you proceed through these votes today, I hope you keep that in mind."