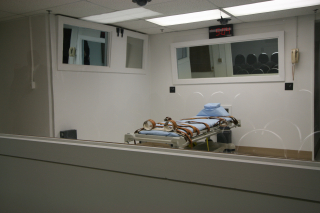 With Florida's death penalty laws under sustained attack in the courts, the state has not executed an inmate in 18 months, and the number of inmates on death row keeps dropping.

Florida's death row population is now at its lowest level in more than a decade as courts continue to vacate death sentences and order new sentencings for convicted killers, in most cases as a direct result of the precedent-setting Timothy Hurst case that struck down the state's death penalty sentencing system as unconstitutional.

A total of 367 men and women reside on death row at Florida State Prison and Union Correctional Institution, down from 383 at the start of this year. By comparison, there were 369 death row inmates on June 30, 2005. In March of last year, the death row population was 389.

Since Jan. 1, the state Department of Correction says, 15 inmates have been removed from death row because of court decisions and a 16th, Wydell Evans, died while being transferred to a court hearing in Brevard County.  According to the state, these are among the inmates who have been transferred off death row this year:

* Victor Caraballo, one of five men convicted of killing Ana Maria Angel, 18, a recent graduate of South Miami High School in 2002 who was abducted from South Beach, gang-raped and murdered.

* Emilia Carr, at 32 the youngest woman in America sentenced to death row two years ago. Sentenced to death for the killing of a woman in rural Marion County in what a court called a "love triangle," she's one of three women on death row in Florida, and her case was profiled by Diane Sawyer on ABC News.

* Zachary Taylor Wood, sentenced in Chipley in 2015 for the killing of a retired game warden. He was the first person in Florida's modern judicial history to be sentenced to death in rural Washington County.

Justice Ricky Polston, in a stinging dissent in the Wood case, wrote: "Beating the victim senseless with a garden hose, tying him up, and trying to set him on fire after dousing him with a petroleum product constitutes cold, calculated and premeditated (CCP). A unanimous jury recommendation for death is not surprising."

Caraballo is the only South Florida killer who has left death row this year. None of the 15 is from Tampa Bay.

The last person executed in Florida was Oscar Ray Bolin on Jan. 7, 2016, making him the 92nd person to be executed since Florida resumed capital punishment in 1979. The last condemned inmate to join death row , convicted double-murderer Craig Wall of Pinellas County, arrived on June 6, 2016.

The state prison website shows 362 inmates on death row, but the agency says that's a mistake that it's working to fix. The true number is 367, the state says.